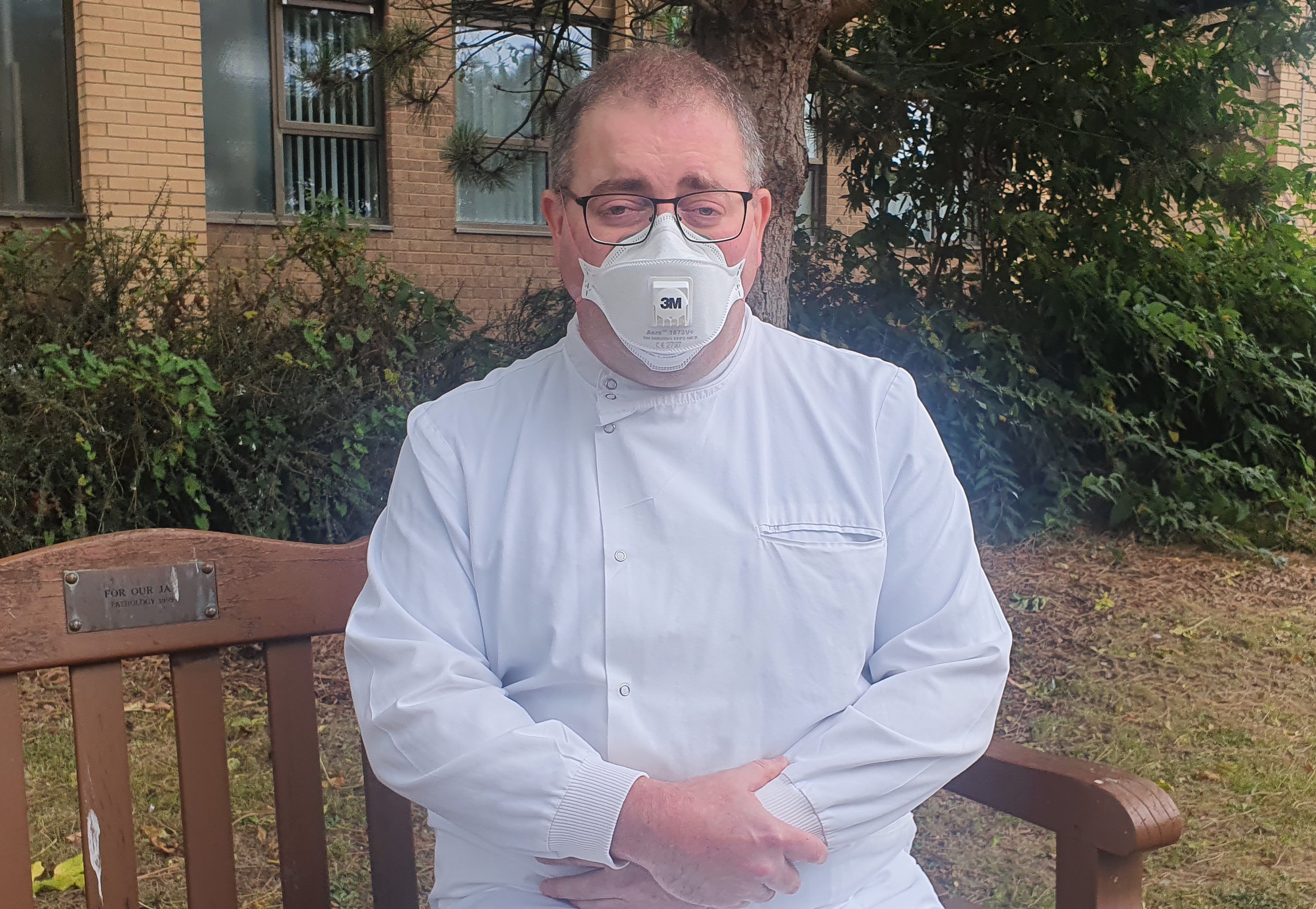 A Swansea Bay NHS worker who faces an uncertain future having developed complications following Covid is urging people to get the autumn booster vaccination.

Piers Meynell was all set for a career change, and on the verge of qualifying as a trainee nurse, when the pandemic hit in March 2020.

Still wanting to do his bit he enrolled as a health care support worker in Morriston Hospital’s Emergency Department and ITU to help colleagues care for the first wave of Covid patients.

Then he became unwell.

He said: “I was on an MSc course to enter nursing and had almost finished my course – I had been given a bit of extra time to finish my dissertation – just before the start of the pandemic. And then it hit.

“I wanted to help out, so I looked at the options available and chose to be a health care support worker.

“I was doing shifts in the Emergency Department right at the start of the first wave.

“It was a complete unknown. We saw what was happening in Italy with hospitals overwhelmed, so we scrambled, almost on a war footing, to cope with that level of threat.

“Fortunately, we were able to mitigate it and manage the first wave, although the toll it took on the staff I worked alongside was heavy.”

The 46-year-old is thought to have developed inflammatory vasculitis, a rare autoimmune disease, through his exposure to Covid.”

Piers did not have the classic symptoms, such as a dry cough. But he had a fever, felt weak and lethargic and had night sweats. As Covid tests were not widely available at the time, occupational health told him that, based on his symptoms, he did have Covid.

“Rather than recovering, I progressively got worse. I would rally a little, but then get deteriorate further. Eventually my GP became concerned about one of my blood tests.

“They identified that there was a problem with how one of my kidneys was functioning. Then they sent me to hospital.

“They carried out a kidney biopsy and identified autoimmune disease. It causes widespread problems with organs.”

Unfortunately while there is a treatment to manage the condition, there isn’t a cure.

Piers said: “The acute phase of the disease has been suppressed by a form of immunotherapy but there isn’t a recovery.

“Unfortunately, this condition is highly prone to relapse on infection and the chances of survival for 20 years are something like 47%. So, it’s not great.

“As long as there isn’t another flare-up of the condition, I should be okay. But it put an end to my nursing career before it had even begun.”

Piers, who previously worked in IT, chose to continue in the NHS, albeit in a different capacity – that of a health care science associated practitioner in Morriston Hospital’s pathology department.

He said: “My current role isn’t patient-facing, so there’s much more control over the exposure I could potentially face.

“It’s a calculated risk. I wear a face covering to mitigate the risk as much as possible.

“What’s key for me is working as part of the NHS. I’ve done a variety of roles, being self-employed, working in IT, working as a waiter, but working for the NHS has been the most rewarding but also challenging job that I have done.

“Yes, I would probably be safer working by building websites alone at home, but I would rather be here making myself useful.”

Having been fully vaccinated, Piers is sharing his story in order to encourage people to continue to be cautious.

He said: “I think the attitude now is that Covid is over. That it’s not something that we have to worry about. But the current infection levels are really high. There’s only been something like 50 days within the last two years where it’s been higher.

“My message to people is, ‘get a booster and still take sensible precautions’. Ideally, people would wear a face covering. That’s an individual choice that people have to take, but I would definitely recommend getting a booster.

“Not just for Covid but also for flu. The flu currently circulating in Australia, which is likely to come over here, is supposed to be quite severe.”

Keith Reid, Swansea Bay’s Executive Director of Public Health, encouraged all who are eligible for a booster vaccination to take up the offer.

He said: “Covid transmission in the community is on the increase again with rates across Wales back at the levels last seen at the end of July.

“This is not being driven by any new variants – it’s because of waning immunity and the removal of interventions such as widespread mask wearing and social distancing as well as people spending more time indoors with the changing season.

“Given expectations of a further significant wave of Covid early in 2023 it is vitally important that everyone take up the offer of a further bivalent booster against Covid as well as influenza vaccine.

“The new bivalent vaccines provide longer lasting protection against serious illness than boosters based on the original formulations.”