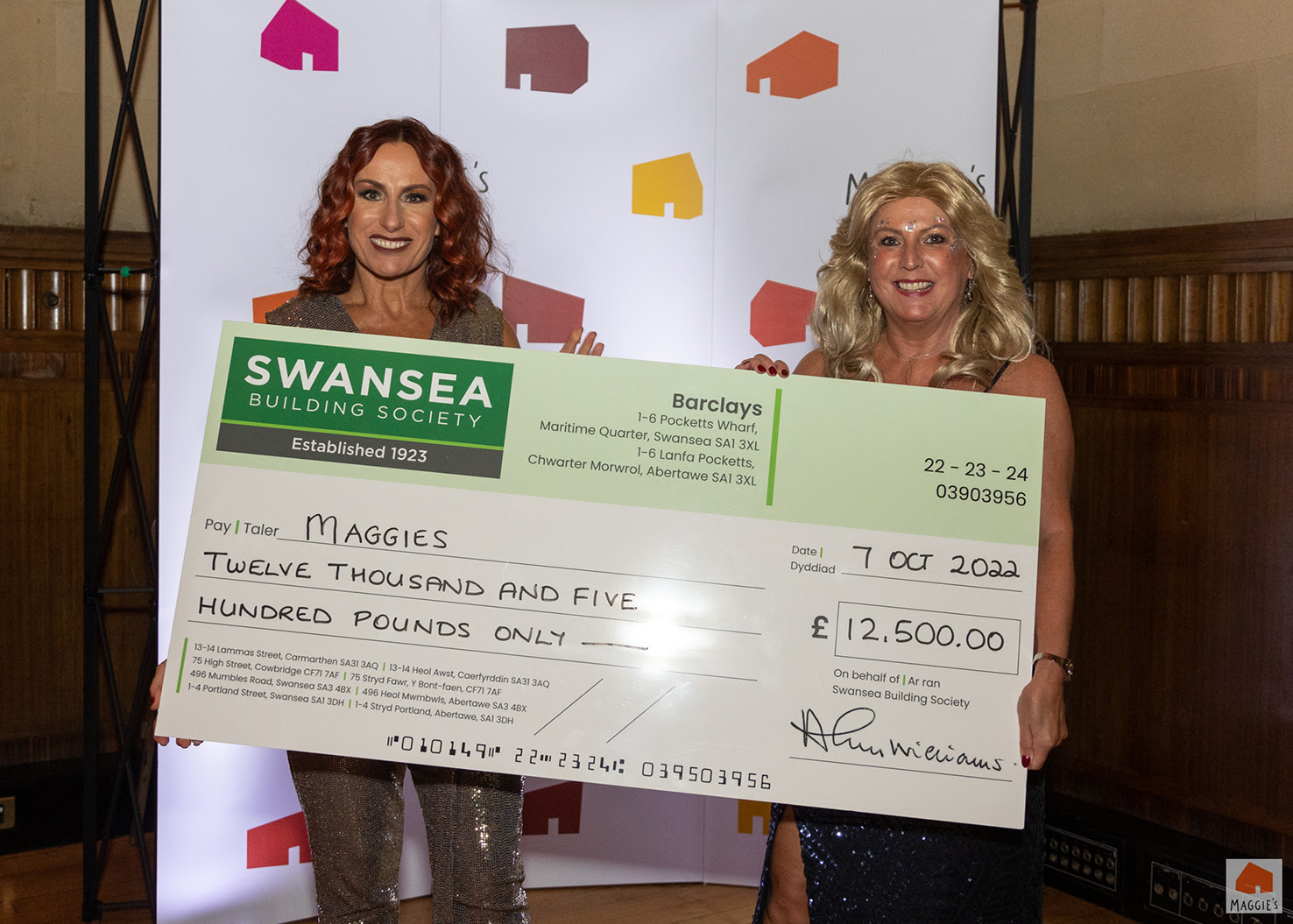 Swansea Building Society has donated £12,500 to its official staff charity, Maggie’s Swansea, presenting a cheque at the charity’s annual ball, held at the Brangwyn Hall, Swansea, on Friday October 7, 2022.

In total, the event raised almost £70,000 for the cancer charity’s Swansea Centre.

So far, fundraising events have included providing refreshments to customers in exchange for a small donation, raffling an Easter hamper, a sponsored dog walk, open water swimming, a firewalk, and taking part in the Swansea Half Marathon.

The Society hopes to raise more with a ‘Go Orange’ themed day at its branches later this month, as well as counting all monies donated to its collection boxes. It also plans to round the year’s fundraising off with a Christmas Carol Concert in December.

Maggie’s was founded by Maggie Keswick Jencks following her own experience of having cancer. During her diagnosis and treatment, Maggie felt that it was as hard on her family as it was on her, so she set about creating a new type of support: a centre that could make the experience of cancer more manageable for everyone involved.

The original Maggie’s centre was opened in Edinburgh in 1996, and the charity now has a network of centres across the UK – including Swansea – and overseas. The centres work in collaboration with conventional cancer therapies, and exist as a caring environment to provide support, information and practical advice to cancer patients and their families.

This support includes help with financial concerns, benefits advice, advice about treatment decisions, and how to access other cancer services. Maggie’s centres also allow those diagnosed with cancer, and their families, to meet and speak to people who understand what they are going through.

Alun Williams, Chief Executive at Swansea Building Society, said: “We’re delighted to be able to make this sizable donation to our official charity – Maggie’s Swansea. The charity does such vital work to support people dealing with cancer and their families. Cancer is an illness that touches so many people during their lives, either personally or through the diagnosis of a loved one.

“The work that Maggie’s Swansea does to support those battling the disease – with information about treatments, practical advice around finances, as well as emotional support – is vital in allowing them and their families to continue to live life to the full despite the diagnosis.”

Lucia Osmond, Centre Fundraising Manager at Maggie’s, said: “We are very grateful to the staff and members of Swansea Building Society for this large donation. Maggie’s provides free cancer support to anyone affected by cancer and this donation will help us to continue to provide the support which is so desperately needed.

“As an independent charity, Maggie’s doesn’t receive money from the Government, so support like this from Swansea Building Society throughout the year is hugely appreciated.”

Related Topics:BusinessCancerCharityfundraisingMaggiesSwanseaSwansea Building Society
Up Next