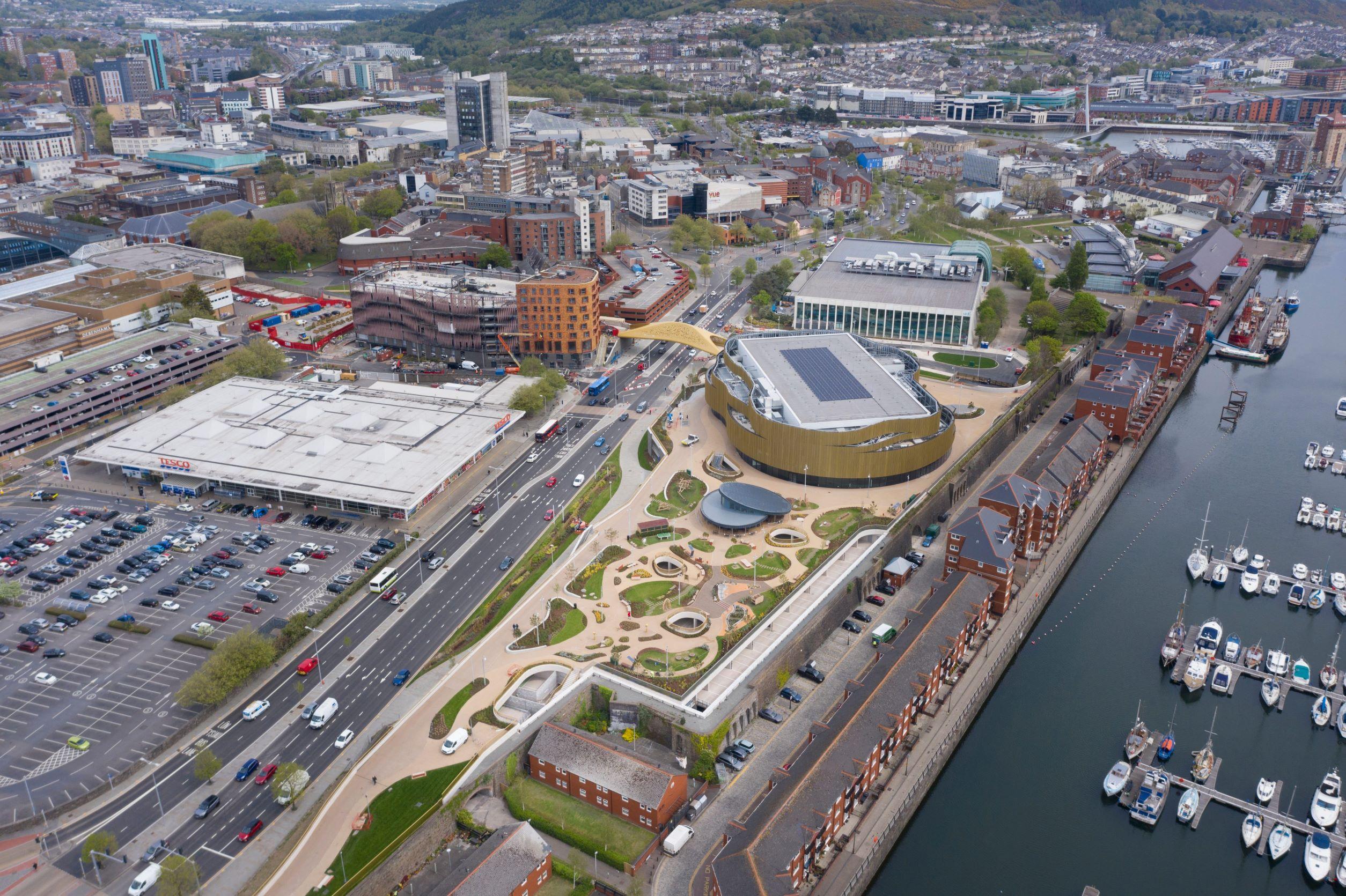 Swansea has been named among the UK’s top four cities in a prestigious awards ceremony.

The city was shortlisted for the City of Year title at the Estates Gazette 2022 awards, which celebrate the country’s best regeneration and development schemes.

Pipped to the post by Birmingham for the award, other cities on the shortlist included Newcastle and Cardiff.

Developed by Swansea Council and development managed by RivingtonHark, Swansea’s £135m Copr Bay district was among the schemes that led to the city being recognised.

As well as Swansea Arena, the district – worth £17.1m a year to the city – also includes a coastal park, the bridge over Oystermouth Road, affordable apartments, car parking and new spaces for local food and drink businesses.

The awards scheme also took notice of other complete, on-going or planned regeneration schemes in Swansea as the city’s £1bn transformation gathers even more pace.

These include major, multi-million pound improvements to the look and feel of both Wind Street and The Kingsway.

Also being developed by Swansea Council, a major new high-tech office development providing space for 600 jobs in the tech and digital sectors is now being constructed at the city’s former Oceana nightclub site.

Both Swansea Arena and the new office development are part-funded by the £1.3bn Swansea Bay City Deal.

These schemes and others have helped attract the private sector to invest in Swansea. This includes the council’s appointment of regeneration specialists Urban Splash to lead on the £750m transformation of several key sites, including the Civic Centre on the seafront and the Swansea Central development site in the area of the former St David’s Shopping Centre.

Cllr Rob Stewart, Swansea Council Leader, said: “The on-going £1bn regeneration of Swansea is transforming our city into the one of the UK’s very best places to live, work, study and visit.

“Led by the council, so much has already been achieved – including the construction and opening of Swansea Arena and the Copr Bay district, and major improvements to the way key areas like The Kingsway and Wind Street look.

“But this isn’t just about high-quality new facilities for our residents and businesses. It’s also about creating jobs for local people and generating a city where the private sector will invest. This is already happening, with much more planned for the coming years.

“Being named among the UK’s top four cities is a major endorsement for the work we’re delivering alongside the private sector in Swansea, which will help further raise the profile of our city throughout the UK and beyond.”

Other on-going schemes in Swansea include the transformation of the former Hafod-Morfa Copperworks, with future tenants to include Penderyn – a world famous Welsh whisky maker. The city’s historic Palace Theatre is being redeveloped as a modern workspace for tech and creative companies.

Led by Hacer Developments, a ‘living building‘ scheme is also being constructed in the city centre. Made up of the former Woolworths unit and a new adjoining 13-storey structure, the scheme will include green walls and green roofs, an educational facility, retail, offices, a landscaped courtyard, rooftop solar panels, battery storage and gardens. Pobl Group will manage 50 affordable apartments forming part of the development.

Related Topics:regenerationSwanseaSwansea Council
Up Next

Santa’s coming to breakfast at one Swansea garden centre