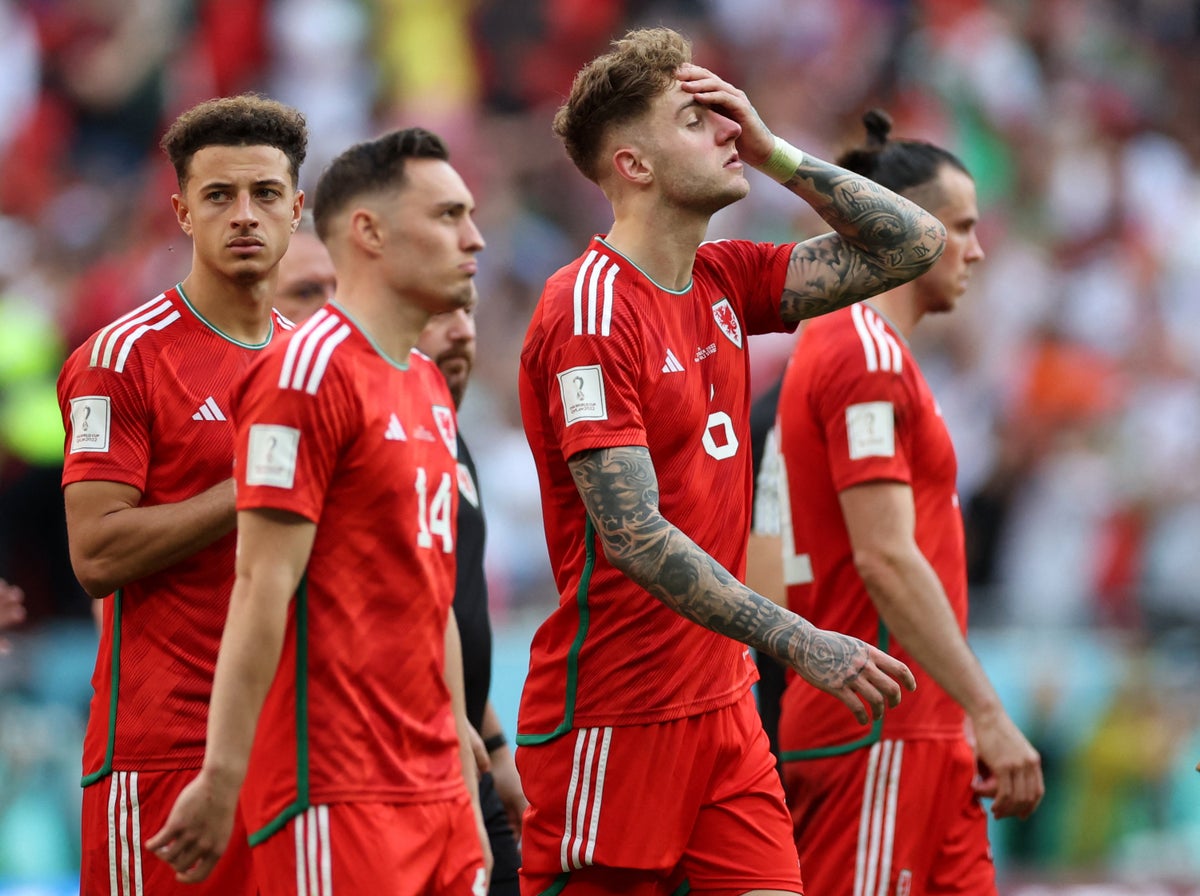 A double from Marcus Rashford and a Phil Foden header the difference as England progressed as winners of Group B into the last 16 of the competition, whilst for Rob Page’s side it is an early flight home winless and bottom of the group.

In Wales’ first World Cup match up with neighbours England at a World Cup finals since 1958, the magnitude of the task was always going to be tricky one having come into the match knowing a win against Gareth Southgate’s group leaders and a draw from the other matchup in the group involving USA and Iran the only realistic permutation that would take them into the last 16.

Page’s side’s task was made harder by the loss of goalkeeper Wayne Hennessey serving a suspension for his straight red card in the 2-0 defeat on match day two against Iran.

In came Leicester City goalkeeper Danny Ward who was one of two changes to Page’s starting lineup that looked to gain their first win over England since a solitary Mark Hughes goal led Mike England’s side to a 1-0 in 1984 at Wrexham’s Racecourse ground.

In a more offensive line up, Swansea City midfielder Joe Allen also bulked up the midfield, replacing Connor Roberts as Wales moved into a 4-3-3 line up.

For England and Gareth Southgate, an unconvincing 0-0 draw against USA still left the Three Lions with work to do from their final group game, knowing the win over Wales would win the group and avoid a daunting last 16 matchup against an in-form Netherlands outfit.

Southgate freshened his team bring in the experienced Liverpool midfielder Jordan Henderson into the starting lineup in one of four changes, with starts also for Manchester City duo Kyle Walker and Phil Foden. The pacey Rashford brought in to support front man Harry Kane.

Wales started the brightest having space and time on the ball while England settled into the game happy to leave their opposition have the lion’s share of play. Allen and Ramsey trying to create a spell of possession as they looked to feed target man Kieffer Moore. The English defense though easily snuffing out the opportunity.

England’s were looking to break swiftly with their counter attacking movement a clear gameplan by Southgate and created the game’s first opportunity in the tenth minute.

Declan Rice neatly breaking up the play, winning the ball playing it to Kane, who in dropping deep managed to set Rashford free on an explosive run toward goal between the two Welsh centre halves. His effort though snaffled by Welsh keeper Danny Ward, smothering the shot away from danger.

This inspired the Three Lions as they started to find a foothold in the game energised by their early chance as they dominated the play in the Welsh half. The game though, was becoming physical and stop started with both teams committed to the cause in their effervescent combative nature, battling for every ball.

Wales stifled their opponents as they gained confidence in their play, but England looked dangerous in movement on rare first half opportunities when they managed to swiftly break. A rare opportunity seeing a slick piece of play between Bellingham and Walker interchanging passes, before releasing Foden to strike a powerful effort over the bar. A warning for Wales as the game came towards its midpoint.

Wales had their best moment of the half just before the break as they fought for their World Cup lives. A neat piece of interplay between Ramsey and Allen seeing the latter striking an effort over the bar.

England though would start the brighter of the two teams in the second half and gained the upper hand. Wales, feeling the effects of the half time loss of Gareth Bale to injury, didn’t get going and a moment of indiscipline gave England an opportunity to strike. Rashford obliging bending a free kick over the Welsh wall into the far-right hand corner past a stranded Ward.

Rashford then turned provider as England doubled their advantage in the next phase of play. The Manchester United forward winning the ball pressing the Welsh midfield, before finding Kane free on the right-hand side of the penalty area. The Tottenham Hotspur striker whipping in a ball to the head of Foden steaming in at the back post to finish clinically.

Wales though would not give up and nearly responded as the game opened up, knowing only a turnaround would make a difference in their hopes of qualification. First Dan James bending a shot past the far post of England keeper Pickford, then Moore cannoning an effort into Harry Maguire just over the bar.

It was always going to leave spaces at the back for Southgate’s side to exploit as England made it three as Welsh heads dropped and hopes faded midway through the second half. The excellent Rashford picking up the ball on the right-hand side from a long ball before cutting in to fire a left foot effort through the legs of despairing keeper Ward to score England’s 100th World Cup finals goal.

It could have been worse for Wales minutes later. Rashford once again the beneficiary from neat play in midfield being released by substitute Callum Wilson. Ward though equal to his effort, denying the forward from gaining his hattrick.

It would have been harsh on Wales who were competitive for long periods but punished by the English counterparts clinical finishing. Ward a steady deputy for regular goalkeeper Hennessey had a fine game saving from both Foden and Bellingham late as England’s relentless onslaught continued.

The score line remained the same, and it was not to be for Rob Page’s side who battled away to the end. Their Qatar adventure ending with defeat in which could be the end for many of Wales’ golden generation. England advancing through as group winners to a last 16 tie against Senegal on Sunday evening at the Al Bayt Stadium.

Related Topics:featuredfootballWales FootballWorld Cup
Up Next

Rob Page: ‘We must now look to the future’

Gareth Bale: ‘We are ready to go and get an upset’