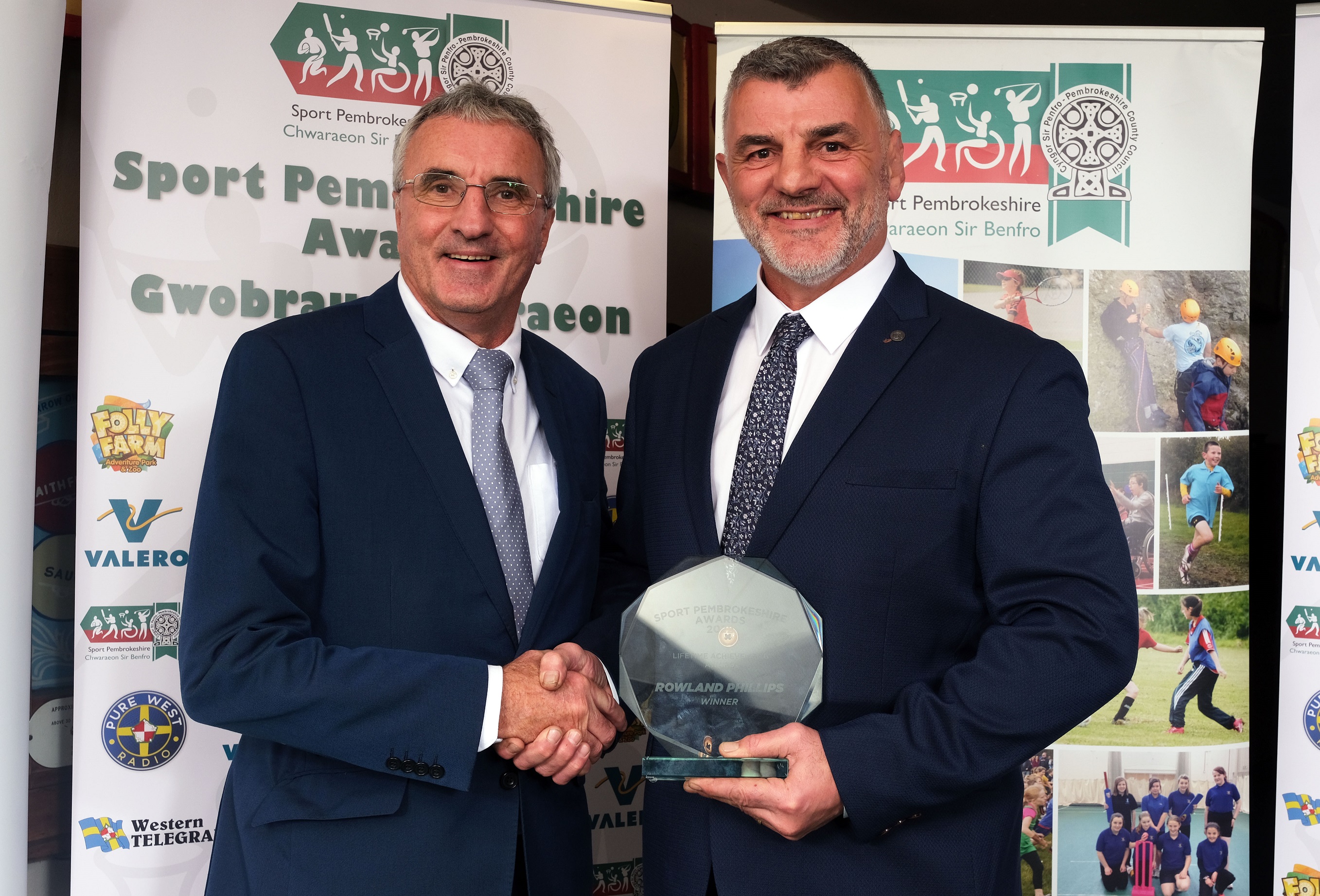 One of the highlights of the local sporting calendar, the Sport Pembrokeshire Awards 2022 were held on Friday (25 November) at Folly Farm.

Celebrating the outstanding achievements of sportspeople, coaches and volunteers, the ceremony recognised 13 award-winners in a variety of categories, the winners of two special awards – the Lifetime Achievement Award and the Special Achievement Award – plus the School Award.

The ceremony was organised by Sport Pembrokeshire, and sponsored by Valero, the Western Telegraph, Pure West Radio, Folly Farm and Pembrokeshire County Council. It was hosted by sports journalist Bill Carne and Cris Tomos.

The winner of the Lifetime Achievement Award was dual code international rugby player and coach Rowland Phillips (pictured, above with Geoff Williams, retired Head of Sport at BBC Wales, who presented him with the award.)

A native of St Davids, Rowland played in the backrow for the legendary Neath pack and won ten caps for Wales between 1987-1990 before moving to rugby league and signing for Warrington.

He also played for Rochdale, Oldham and Workington; won the Regal Trophy and represented Wales and Great Britain.

His coaching career was equally impressive. In 2003, he returned to his beloved Neath and led them to four successive Premiership titles and three Cup Final victories.

He undertook top roles home and abroad with among others the Ospreys, London Welsh and Wales Under-18s.

He has also been coach of the Wales Women’s national side, with his daughter, Carys achieving international success too, in her dad’s footsteps.

“Rowland has achieved international success but remained close to his family and community. He’s a real role model,” said Geoff Williams, retired Head of BBC Sport Wales, who presented him with the award.

The winner of the Special Achievement Award, presented by the Chairman of Pembrokeshire County Council, Cllr Pat Davies, was Brian Griffiths of Burton Cricket Club – an active member of the club for 72 years.

Brian (pictured above, with Cllr Davies) played his debut as an 11 year old when he turned up to score but was asked to play when the team found itself with only ten men!

As well as playing a huge number of games for club and county he was also an excellent coach for over 40 years, initially with Burton and later on in the Pembrokeshire coaching set-up.

In recent years, Brian also umpired the club’s second team but his major contribution has been as the groundsman at Oatfield Park.

Burton all-rounder Steve Jones said: “Brian Griffiths has always typified the very best of cricket, on and off the field.

“He has been an excellent player over such a long period and worked tirelessly as a coach and groundsman. But above all that he really is a gentleman of the sport.”

In addition to the worthy finalists and winners, Sport Pembrokeshire also recognised Johnston CP School for its commitment to health and wellbeing.

Sponsored by Pembrokeshire County Council, the School Award was presented by Steven Richards-Downes, Director of Education.

Johnston school has developed their provision of inclusive sport with 12 after-school clubs every week, introduced a Special Visitor Programme to introduce learners to professional athletes and interesting speakers from all walks of life, offers a huge range of opportunities in dynamic PE sessions, and promotes outdoor learning with the Outdoor Schools programme.

“Once again we’ve heard about some truly inspirational achievements, and outstanding examples of teamwork behind the scenes,” he said. “Well done to everyone.”

The winners are pictured below:

Club of the Year

Pictured is Elizabeth Clissold from Pembrokeshire Performance Swimming who accepted the award on behalf of winner Lily Rice who was competing in Glasgow, with finalists Lizzie Booth and Michael Jenkins, and Gemma Cutter from Disability Sports Wales.

Young Volunteer of the Year

Junior (U16) Team Achievement of the Year

Team Achievement of the Year

Club Organiser of the Year

Coach of the Year

Pontardawe Swimming Pool to close due to structural issues