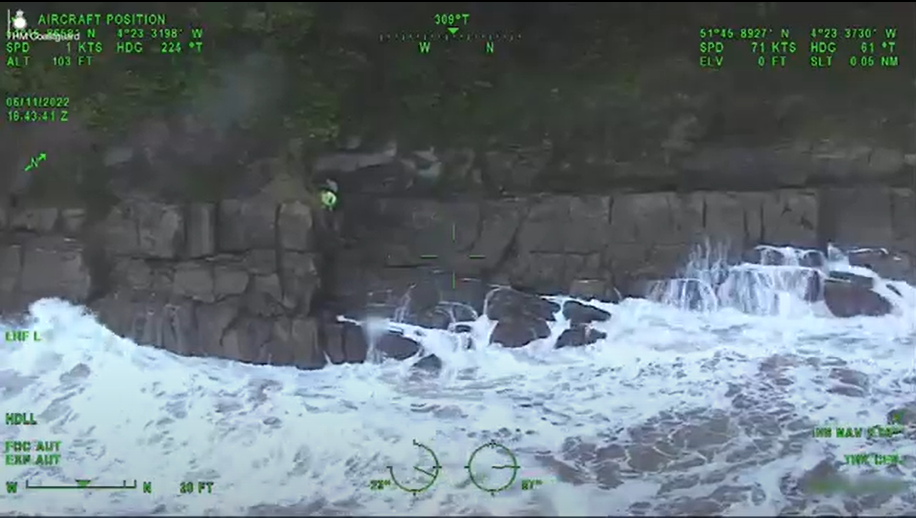 A family has been winched to safety after clambering up a cliff face on the rugged Carmarthenshire coast to avoid the incoming tide.

HM Coastguard were called to the rescue of the two adults and two children, who found themselves cut off on the rocks below Llansteffan Castle, as waves battered the rocks they were on.

The coastguard warned that it was only the addition of a high visibility jacket on one of the four that meant the helicopter was quickly able to spot them and go to their rescue.

They were also fortunate that a passer-by spotted the trouble they were in as the tide came in and reported it to the coastguard, allowing help to get to them ‘in the nick of time’.

George Close, maritime commander for HM Coastguard, said: “This family were out for a lovely evening stroll along the beautiful sandy beaches overlooked by the ruins of Llansteffan Castle when they found themselves cut off by the tide and in danger of being swept away.

“It is really important to take note of the local warning signs – and check the tide times, it’s easy to do with a quick search online or download an app.

“What looks like an ideal spot for a walk is actually the mouth of the Towy estuary into Carmarthen Bay and, when the tide comes back in, those sandy beaches quickly disappear under fast-flowing water.

“It turns treacherous in minutes, as this family quickly found out. It’s easy to take your eye off safety for a moment, and that’s all you need to be in big trouble.”

The coastguard received a call shortly after 3.15pm on Sunday lunchtime (27 November) from a person concerned about the safety of four people on the beach at Llansteffan, as he saw the tide was on its way in and suspected that they were already cut off.

Llansteffan Coastguard Rescue Team and Ferryside Independent Lifeboat were sent to conduct a search and locate the casualties – with the lifeboat spotting them within minutes of launching. They were in a crevice in the cliff below the castle.

But this rocky terrain, accompanied by the strength of the swell on the estuary prevented a rescue from either the land-based or water-based teams, and the Coastguard helicopter was requested.

A helicopter crew from St Athan were quickly on hand and were able to winch the family to safety and end their scary ordeal.

George added: “The evenings are also getting darker earlier and quicker and we would ask people to bear this in mind when planning a trip, it’s much harder to find your way to safety in the dark.

“Fortunately they were wearing high-vis jackets and that really helped the helicopter to spot them and winch them to safety. They were also very lucky the passer-by called it in, as it allowed us to get to them in the nick of time.”