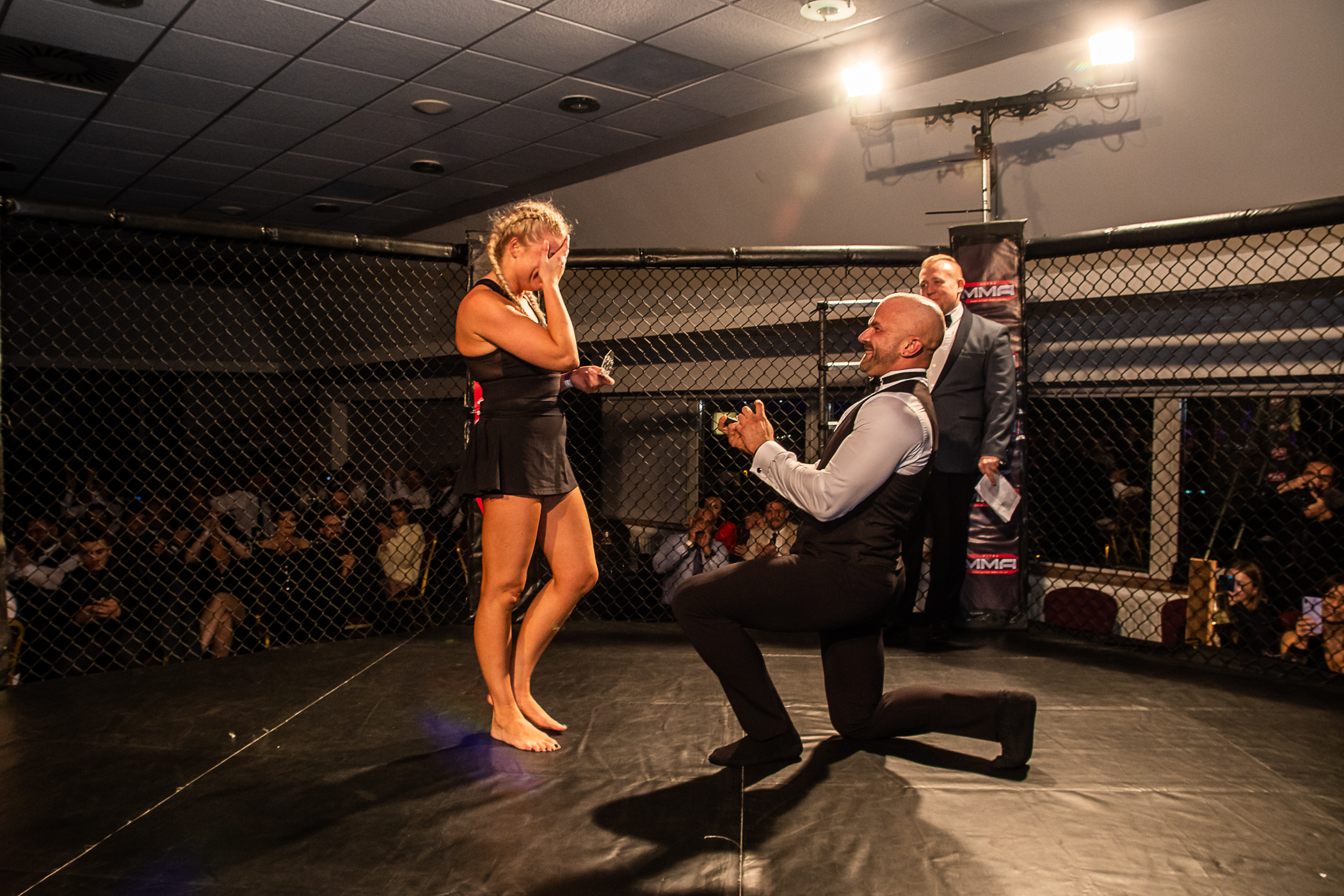 A teaching assistant was left ‘completely speechless’ when her charity MMA fight victory celebrations were interrupted by a surprise marriage proposal.

The proposal came on the one year anniversary of Dorota and her fiancé Mike Fury starting their relationship, having met on Facebook.

When Dorota was presented with the white gold, three diamond ring at the Swansea.com Stadium – made by Mike’s cousin who is a jeweller – she was in ‘complete shock’ and jumped into her fiancé’s arms.

Dorota was taking part an Ultra MMA event where participants undergo eight weeks of free professional MMA training before a showcase event in front of hundreds of spectators.

Those taking part are asked to sell tickets for the show and raise at least £50 for Cancer Research UK.

So far, Ultra Events – the company behind Ultra MMA – has raised a staggering £27 million for the charity.

Dorota raised an impressive £630 and was supported on the night by her eldest daughter Ariana, 26, as well as Mike’s friends who had travelled from Manchester.

The 43 year old who has lived in Swansea for 19 years, was born in Gdansk, Poland, but now lives on Lon Gwesyn, Birchgrove.

After training at Two4 Martial Arts in Fforestfach, she won her three-round MMA fight on points and found the challenging experience ‘very enjoyable.’

Dorota, who is in the process of completing her teaching assistant course, said: “My boyfriend came into the cage at the end and I thought ‘Why?’ What are you doing?’

“It was a complete shock when he proposed, I felt blessed. It took me a while to realise what had happened.

“Everyone was in shock, my eldest daughter Ariana was in tears.

“It was really nice, he couldn’t have done it in a better way.

“Mike is so nice and he is my best friend.

“He was totally supportive of me taking part in the MMA event in every way, he said this is a once in a lifetime opportunity, you should go for it.

“After the bout we all went to Wine Street to celebrate. I was exhausted, but when we were out celebrating the music gave me the energy to dance and we kept going until 4am.”

Mike, 46, said: “I was having a pint with my mates beforehand and they could tell I was really nervous, but I couldn’t tell them why.

“I think I was more nervous about my speech than Dorota was about the fight.

“It was really hard to keep it a secret – Dorota’s daughter Ariana busted me reading my notes before the bout.

“I was nervous when I walked into the ring.

“I started by thanking the girls for a good fight and the organisers, Dorota was trying to shut me up!

“She was speechless, she looked down at the engagement ring and just jumped into my arms.”

Mike, who owns a construction recruitment company, has trained in various martial arts all his life and he is now considering giving Ultra MMA a go himself after being inspired by Dorota’s efforts.

Mother of three Dorota said she has ‘always been a big fan’ of watching MMA but this was her first experience of taking part in the sport.

Dorota, who has two daughters – Ariana and Marika, 14 – plus nine-year-old son Marcus, walked on to the Polish song ‘Walka z cieniem’, which is about fighting with shadows.

She added: “I thought I was weak because that is what I had been told all my life. I really enjoyed the eight weeks of training.

“I noticed that my body and mind changed in lots of ways. I realised that I am strong and I can do anything.

“I’ve felt my body get more muscular with the training.

“It was a tough bout. My opponent was really strong on her feet and it was really tough to take her down.”

Since taking part in the Ultra event, Dorota has decided to carry on training for MMA and is hoping to take part in the next Ultra MMA Swansea event.

The next Ultra MMA event takes place in Swansea on 31 March 2023, and training starts in the week commencing February 6.

Anyone thinking of signing up can visit: https://www.ultra-mma.co.uk/sign-up/.

Related Topics:BirchgroveCharityfightMarriageSwanseaUltra MMA
Up Next