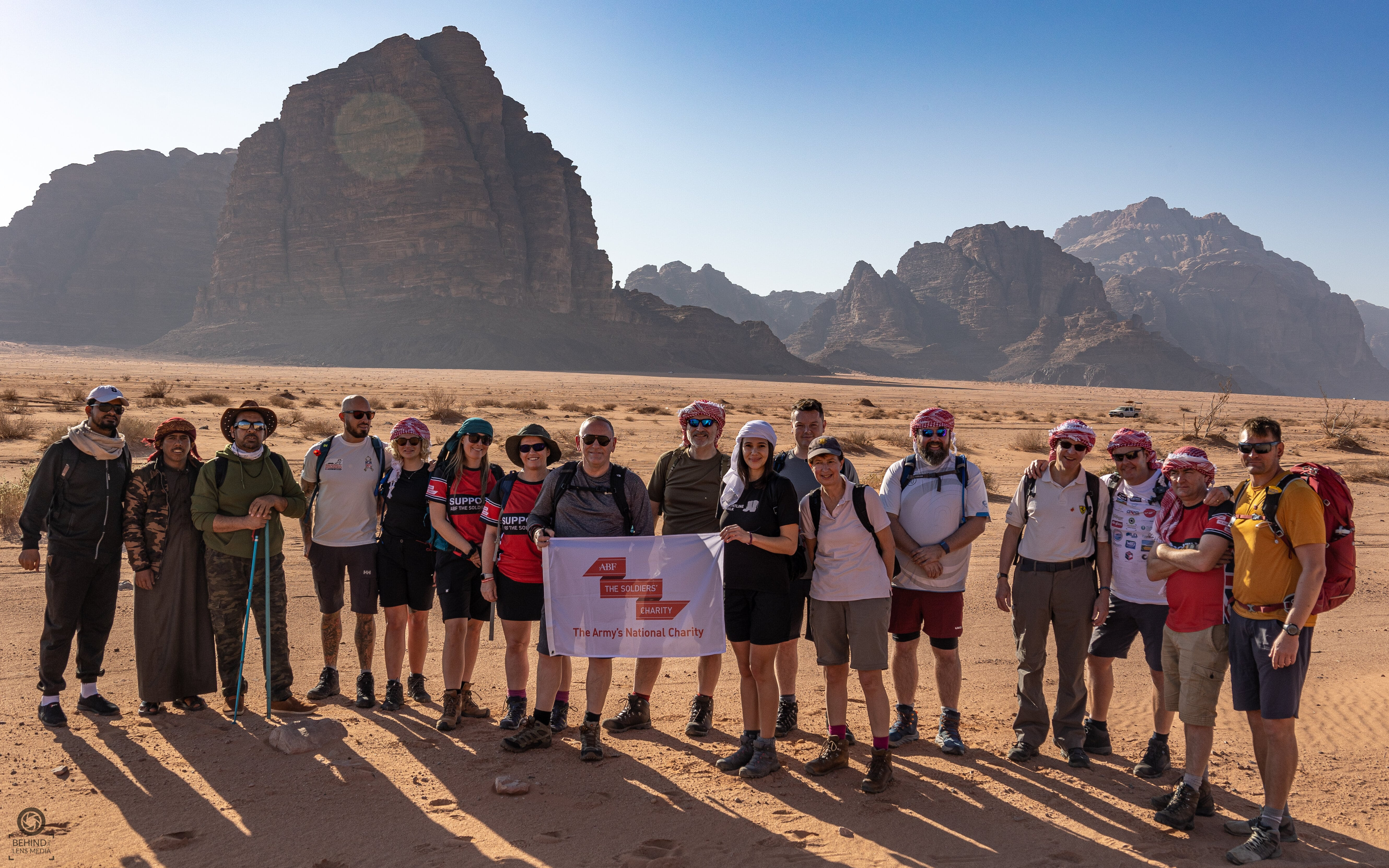 Business owners from across the Swansea area joined forces to take part in a challenging 103-kilometre trek in the Wadi Rum region of Jordan, raising over £11,000 for charity in the process.

The grueling trek was completed over a five-day period and involved hiking between 22 – 25 kilometres daily, weaving through old shepherd paths, desert wadis and mountains.

The funds were raised in support of ABF The Soldier’s Charity, which stands at the forefront of support for the Army family, supporting 65,000 people in 48 countries last year. As one of the largest funders in the sector, the charity awards grants to individuals and families, and funds leading organisations that support soldiers, former soldiers, and their families.

Cherie Coughlan, Managing Director at CoreGenic, a specialist health and safety consultancy based in Neath, raised an individual total of £1,790 for the charity. Also undertaking the challenge were a host of Swansea business leaders: Alan Brayley of AB Glass, Tim Hughes of Behind the Lens Media – who was also responsible for the photography of the trip, Tony Worsley of Pixafusion, Jo Polson of Vindico and Catherine Hawtin and Peter Davies of ABF The Soldiers Charity. The combined total raised by those taking part in the trek has now reached £11,572.40.

The challenge was set up in conjunction with adventure company Tribal Tracks, who organise such trips for charity fundraising, corporate groups, as well as families. The trek began at the famous geographical landmark called the Seven Pillars of Wisdom and concluded at the Ancient City of Petra – a site that dates back to at least 300BC. The region has also been the location for many Hollywood films including Indiana Jones and the Last Crusade and Lawrence of Arabia.

Speaking on the experience, Cherie Coughlan, Managing Director at CoreGenic, said: “The Wadi Rum challenge was an absolutely surreal experience. Jordan as a country and culture was fascinating and the Bedoin people were very welcoming. It was interesting to learn about the Bedoin culture, particularly the meals we had, one of which was cooked completely underground.

“The challenge itself definitely tested my inner boundaries, resilience and strength, as it was meant to do. The relentless effort was worth it to support a charity that is very close to my heart. I would do it again tomorrow! I would also like to take this opportunity to thank those who have donated, it is going to a great cause.”

Peter Davies, ABF The Soldier Charity, said: “It’s challenges like these that really take people out of their comfort zone where they don’t have the safety net of internet, mobile phones and the things we take for granted daily.

“Business owners rarely find a chance to put that to one side which is why for some, it is a lifechanging experience that reminds you what is important. Individually, each member gave it their all, even on the hard days, and relied on each other’s support to get through it. I truly think these treks can kickstart aspects of both your personal life and business life from a motivational standpoint.”

The JustGiving page set up by Cherie Coughlan will still be open for a further three months for any further donations to be made.