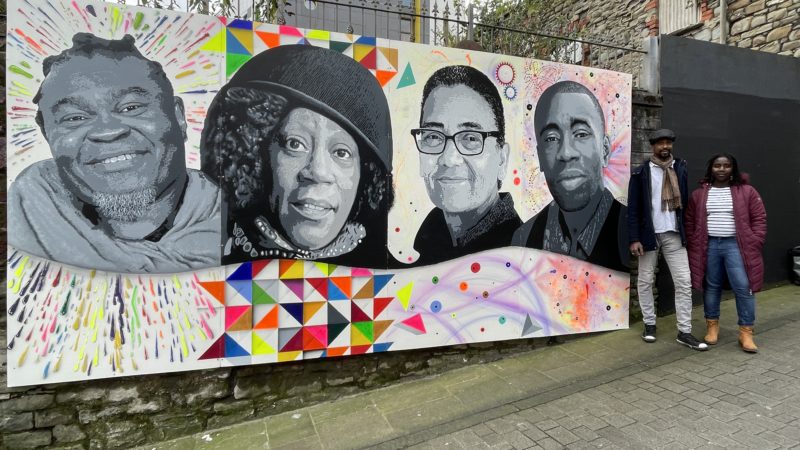 The installation in King’s Lane off Swansea High Street is a collaboration between Coastal Housing and local artists Melissa Rodrigues and Joel Morris, both graduates of UWTSD.

It is a first foray into producing street art for either of the artists involved, although both have been influenced by the discipline. “Street art was a great influence on me” says fine arts graduate Melissa, “so its techniques have inevitably made its way into my work as it’s progressed.

“Working with stencils was a way to connect with the work of Portuguese street artist Vhils, who made a particular impression on me growing up.

“By combining stencil work with fabrics and patterns that have come to represent African culture – despite originating in Western Europe – I want to directly address issues of identity resulting from the colonial past.”

For photography and the arts graduate Joel, it was working as a screenprinter that first introduced him to street art techniques and unlocked a passion for the visual arts: “I tend to work through the mediums of photography and painting’, says Joel, “often combining both disciplines within the same work.

“When the opportunity to work with Melissa and Coastal came along, I really wanted to use it to showcase modern black British artists who represent culture all across the world and yet may not be familiar faces to the British public.

“Sonia Boyce is a prime example of this, being the first female black British female artist to represent Great Britain at the famed Venice Biennale international exhibition.

“Neither Melissa nor I are street artists, but what we have created is an installation that draws on its tools and techniques to create a work of fine art that still has mass appeal and works as piece of public street art.”

“Coastal has supported Race Council Cymru’s Black History Wales programme as a sponsor for some years but we wanted to find additional ways of promoting equality, diversity and inclusion in the communities where we work”, says Chief Executive Debbie Green. “Arts and culture is central to how Coastal undertakes regeneration activity and we’re therefore well-positioned to provide this platform for representation”.

Swansea named one of the most curious cities about Christmas