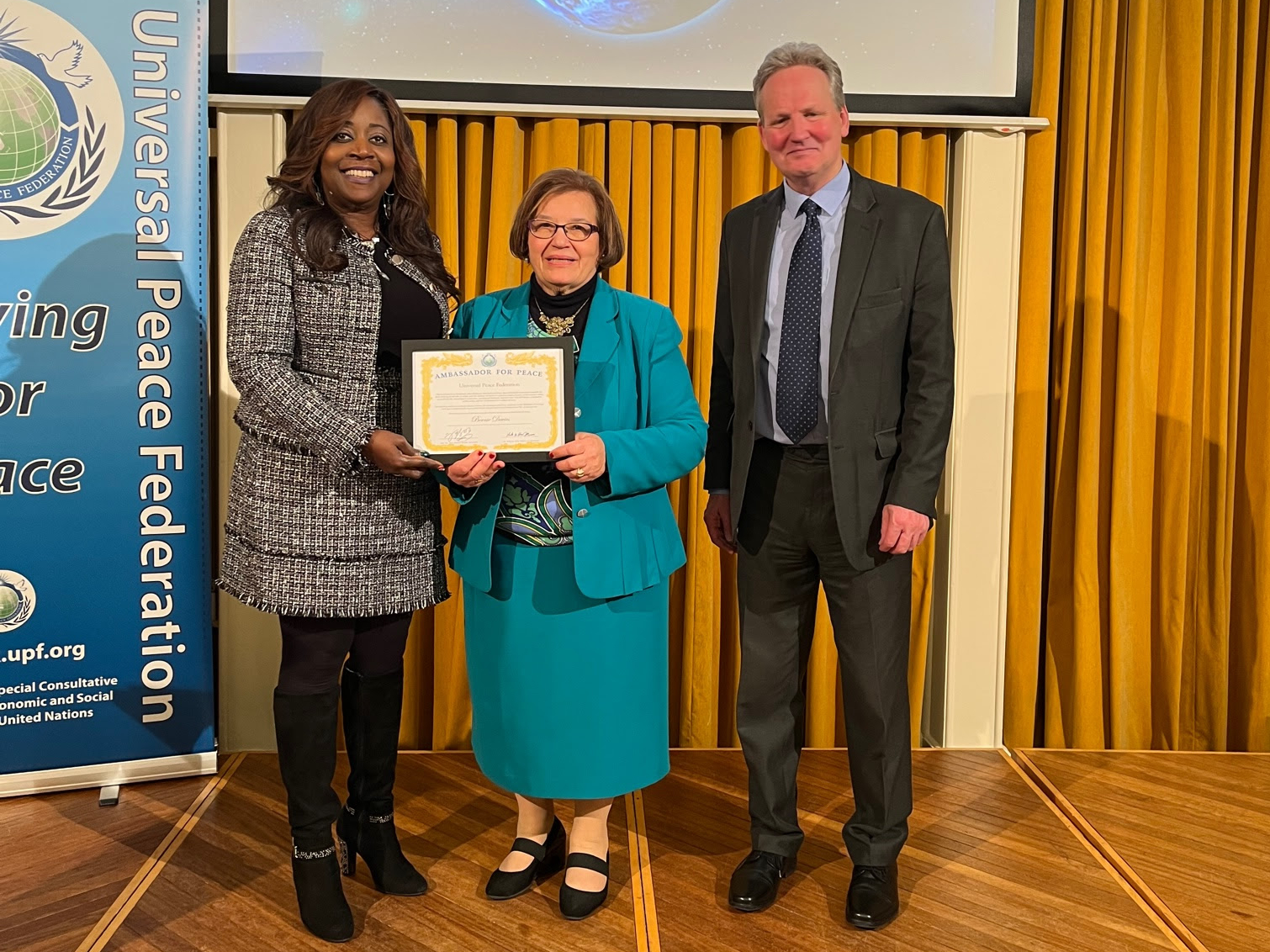 An inspirational entrepreneur and bestselling author from Wales has been honoured with a prestigious award by the Universal Peace Federation (UPF) in the same month as being appointed to a new role on the Advisory Panel of the Public Services Ombudsman for Wales.

Bernie Davies, a former lawyer, restaurateur, award-winning motivational speaker and owner of the Introbiz West Wales franchise, received an Ambassador for Peace Award from the Universal Peace Federation (UPF) at its UK headquarters at Lancaster Gate, London, on Saturday December 10, 2022.

The award was presented by the Director of UPF UK, Margaret Ali, in recognition of Davies’ inspirational work highlighting the importance of diversity, inclusion and equality. It follows her speech entitled: ‘Now is the time’, given at the House of Lords on November 15, to mark the United Nations (UN) International Day for the Elimination of Violence Against Women and Young Girls.

The UN calls violence against women and girls ‘one of the most widespread, persistent and devastating human rights violations in our world today’. The UPF Ambassador for Peace Award was presented to Davies on the final day of a global, UN-led 16-day campaign of activism against gender-based violence. UPF has now also asked Davies to work further with the organisation.

UPF is an international and interreligious network of individuals and organisations, including representatives from religions, governments, civil society and the private sector, dedicated to achieving world peace.

As a non-governmental organisation, UPF holds a general consultative status with the Economic and Social Council of the UN. As such, it supports the work of the UN, particularly in the areas of interfaith peacebuilding, peace education, and the strengthening of marriage and family.

The award comes in the same month in which Davies has also won the Women’s Business Club 2022 Speaker Award and been appointed as one of three new independent members on the Advisory Panel for the Public Services Ombudsman for Wales.

The Public Services Ombudsman for Wales has legal powers to investigate complaints about public services, independent care providers in Wales, and allegations against councillors of a breach of their authority’s code of conduct.

The Ombudsman’s Advisory Panel is a nonstatutory forum whose main role is to support the Ombudsman in shaping strategy and providing leadership to the office.

Davies – the first black female to sit on the Advisory Panel – will start her role in the new year. She will help support the Ombudsman with an external perspective to assist in the development of policy and practice on matters of diversity, inclusion, and equality.

Bernie Davies, entrepreneur, and winner of the UPF Ambassador for Peace Award, said: “To receive this award from the Universal Peace Federation is a great honour. As a survivor of abuse myself, I feel it is vitally important to highlight the plight that so many women around the world face on a daily basis. We must all play a key role in finding ways to end violence of all kinds and demonstrate that those who have suffered its devastating effects can go on to achieve great things for themselves, their families and their communities.”

“To be invited to join the Public Services Ombudsman for Wales Advisory Panel is another great honour. I hope my personal experiences will be able to help inform this valuable, impartial service to understand how matters of diversity, inclusion and equality impact on the decisions we make every day, and how a diverse and inclusive approach can benefit society.”