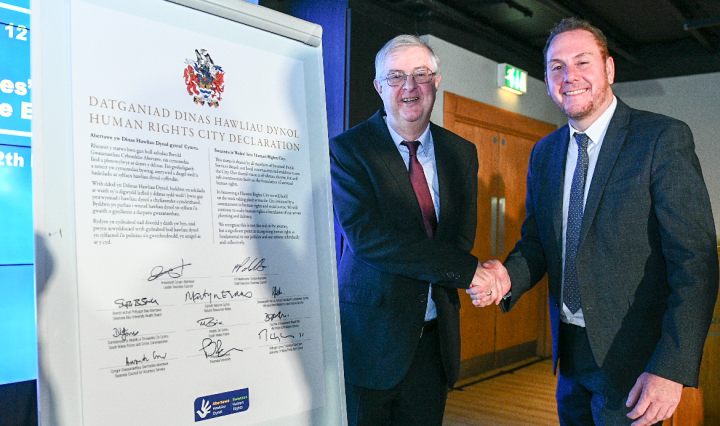 Swansea has become Wales’ first Human Rights City following a year of action to recognise their importance to the lives of all residents and organisations.

First Minister Mark Drakeford joined Swansea Council leaders and senior representatives from other key organisations and businesses at the Swansea.com Stadium for the declaration on Monday (Dec 12).

Organisations have been working together to embed human rights into their everyday working practices and raise awareness of rights among people in Swansea.

Mr Drakeford said: “It is a great pleasure to celebrate Swansea’s achievement of becoming the first Human Rights City in Wales.

“Swansea has recognised the importance of human rights as a way of safeguarding people and making sure everyone feels a part of the community.

“The Welsh Government is proud to work together with those who are dedicated to defend and promote human rights, to help us to build a stronger, fairer more equal Wales and to ensure Wales continues to be a nation of sanctuary”.

Council leader Rob Stewart said it was a proud day for Swansea but this was just the start of the process.

Cllr Stewart added: “This time last year we set ourselves the challenge, along with our partners, to become a Human Rights City.

“During the last year the council has been exploring ways we can improve our services by ensuring there is a focus on human rights in all that we do and the decisions that we take.

“We have also been raising awareness of human rights and speaking with communities about how we can build on the work that had already been taking place.

“There is a real determination for Swansea to be a city where everyone is equal, where everyone understands they have human rights and responsibilities, what they are, and where we all respect the rights of others.

“Everyone will have a voice, especially those who are currently marginalised or socially vulnerable, and will have the opportunity to shape the vital services that they rely on day to day.”

Cllr Stewart announced that together with Swansea University the council had produced a guide to help organisations embed human rights into their day to day activities and there would be a series of training events with the British Institute of Human Rights which will be on offer to organisation across Swansea.