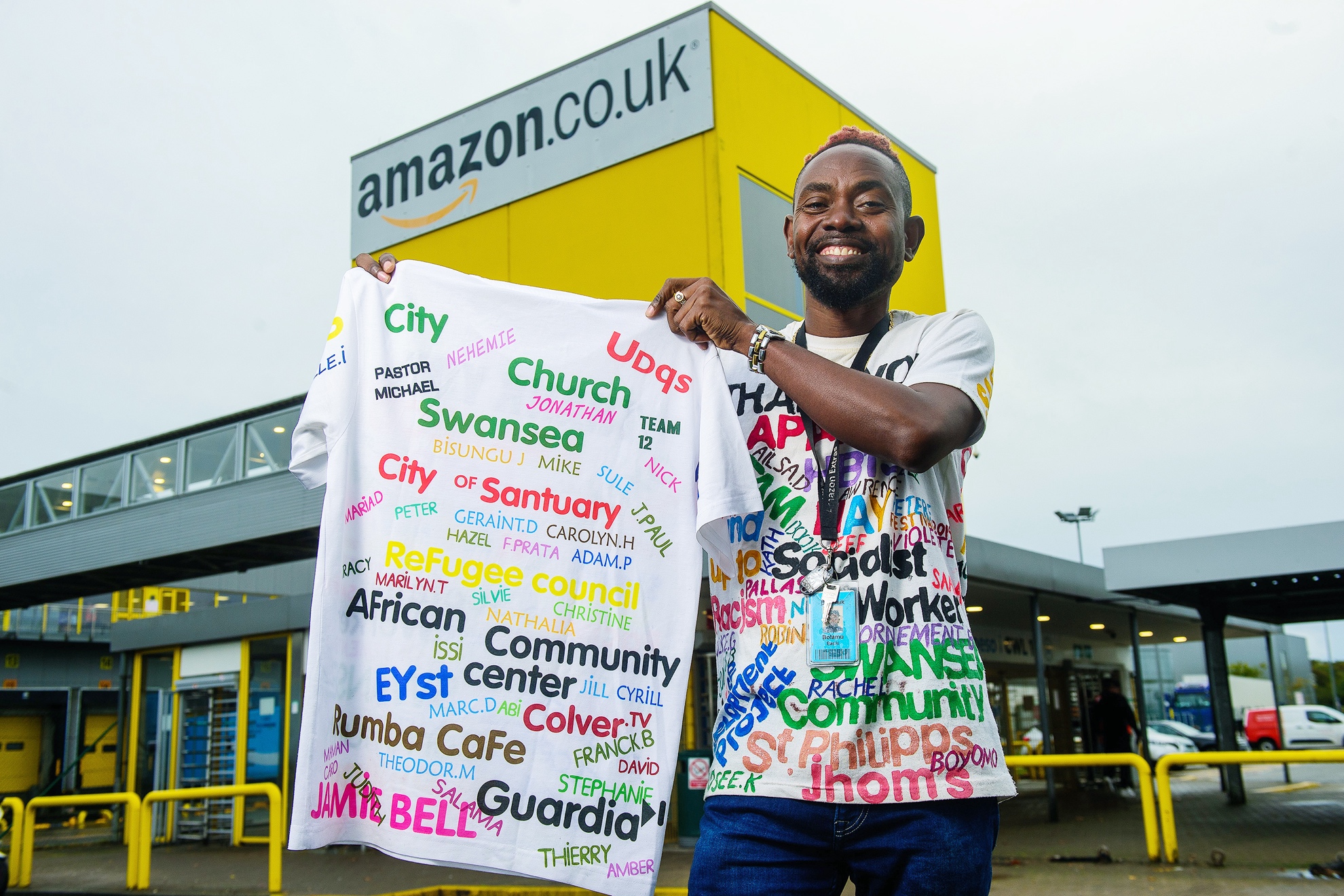 A former asylum seeker, who works at the Amazon fulfilment centre in Swansea, is using his life experience to educate local children on the importance of inclusion.

Otis Bolamu, who works at Amazon in Swansea, moved to the UK five years ago, after he was forced to flee his home country of the Democratic Republic of Congo to seek asylum. Otis was granted refugee status in the UK in 2020 and now lives in Swansea.

Otis worked for the electoral commission in his home country, but was unfortunately forced to flee for his own safety after being labelled as a spy for an opposition political party.

Otis arrived in the UK in 2017, claiming political asylum upon arrival. He spent some time in Cardiff, before being moved to Swansea.

In December 2018, Otis was taken from his bed by immigration officers and told he would be held at a detention centre in Gatwick before being deported back to the Democratic Republic of Congo.

At the time, Otis was volunteering at the Oxfam bookshop in Swansea and had built up a network of friends in the community. Following an outcry by supporters and the presentation of a petition with 68,000 signatures in the House of Lords, Otis was allowed to return to Swansea for his case to be reconsidered.

To give back to the Swansea community who welcomed him with open arms, Otis has used his experience to support other refugees in the Swansea area, assisting them in the transition process and helping them settle into their new lives in the UK.

He also works closely with local primary schools to promote the value of human rights, educating children in Swansea about the importance of acceptance. Otis shares his story with the children to encourage empathy and inclusion.

Speaking on his work in local schools, Otis said: “I really enjoy visiting schools and sharing my story. I explain to the children how people can experience a difficult time when moving to the other side of the world. They have left their country for a new life, leaving family members and friends behind; it’s not easy and you have to fight to be accepted. I promote the value of sticking together – the value of equality and acceptance in society.”

Otis plays drums for the children during his school visits, and has remarkably played drums with Prince Charles, now King Charles III.

Speaking on the event, Otis said: “The monarch visited the town to celebrate the 50th anniversary of Swansea becoming city of sanctuary, and I had the opportunity to meet King Charles and his wife, Queen Consort Camilla. It was a great experience.”

When carrying out community work, Otis always wears a very special t-shirt, which symbolises his community spirit and references many of the schools, charities and organisations he has proudly worked with.

Otis said: “I like to promote everywhere I go, and I wear my t-shirt like my branding. It shares my message and my voice.”

When invited to the schools, Otis explained that the children are excited to meet him, as their teachers have presented him as someone who didn’t give up and didn’t lose hope during difficult circumstances. Otis mentioned the children are always excited to take photos with him and his t-shirt.

Otis has contacts with MPs, churches and other members of the community in Swansea and wider Wales. He is always building his community contacts and is keen to get involved with new organisations to share his message with new audiences.

Otis added: “Without immigration, we wouldn’t be able to welcome so many fantastic people to the city of Swansea. When people hear my story, they hear the message not to give up, and that’s exactly what I’m striving for.”

Amazon Swansea General Manager, Christopher Law, added: “Otis is a much-loved member of our team at Amazon in Swansea, and we’re pleased to have him here with us. His story is inspirational to all of us, and his work in the community is beneficial to so many people.”