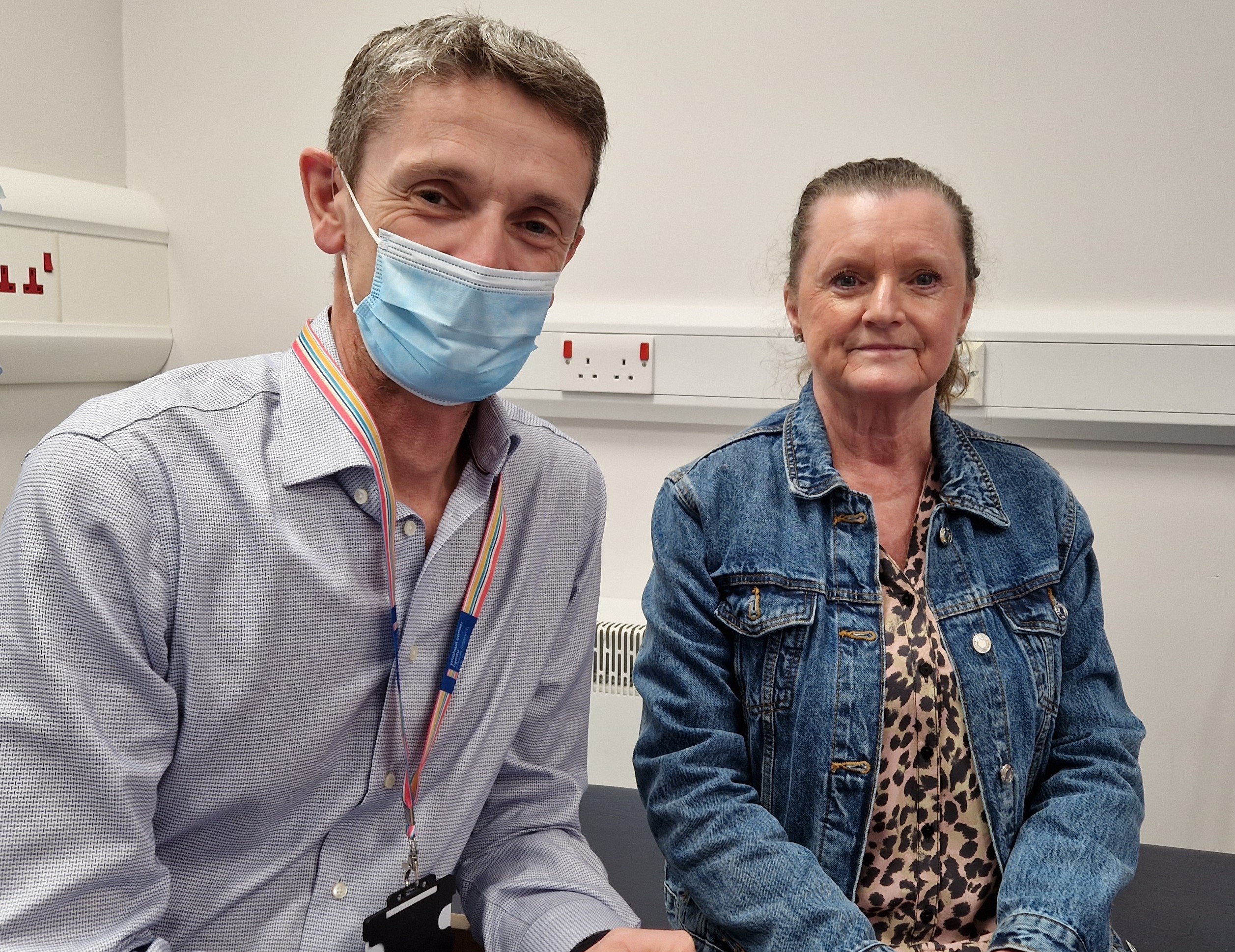 A Swansea Bay patient has been spared the prospect of a six month hospital stay – and being fed intravenously – thanks to an innovative new device.

Mandy Brown required emergency surgery in Morriston Hospital during the summer to remove some of her small intestine.

The operation would usually require a lengthy stay in hospital before going under the knife again to put the bowel back together, however, Professor Dean Harris took a different approach.

The consultant colorectal surgeon employed a new device, never before used in Wales, that allowed his patient’s bowel to work naturally negating the need for intravenous feeding, enabling the 65-year-old to recuperate at home.

Professor Harris said: “I operated on Mandy around four months ago after complications around a different emergency operation, when she had to have some of her small intestine removed, and it wasn’t safe to join the bowel back together.

“We had to form an external stoma, close to where the stomach is.

“Normally that would mean she would have to stay in hospital for six months, on intravenous feeding, until the scar tissue inside her abdomen settled down enough for us to re-operate and join the bowel back together.

“What we’ve done instead is fit her with a device called the Insides Device, which is a machine that will suck up the contents of the stoma bag and infuse it down the lower part of the bowel to allow it to work naturally. That means that she can get all the nutrition she needs delivered to the bowel where it is of most benefit.

“The plan is to bring her back in January and operate to reverse the stoma and then she won’t need the device any more.

“Mandy has been able to come off the intravenous feeding and go home from hospital for the next two or three months while she is waiting for her operation.”

The move has obviously benefitted Mandy but also saved the health board money.

Professor Harris said: “The benefits are that the patient is happy and has a better quality of life, as they are not bound to be in hospital.

“It’s also hugely cost saving because we avoid the cost of the hospital bed – £400 a day – and £80 a day cost of the intravenous nutrition.

“It’s also probably reducing the risk of complications by being on intravenous feeding for that period of time.”

Mandy is the first person in Wales to be fitted with an Insides Device.

Professor Harris confirmed: “The procedure is called Chyme Reinfusion. It’s not a new technique – it used to be possible by a very messy way by using syringes and catheters – but this system is new to the market and makes the process a lot simpler to do, which means the patient can do it themselves at home.

“I’m told by the company that makes the device that she is the first patient in Wales to have this done. It’s very exciting to be able to use innovative technology with Swansea Bay patients.”

Professor Harris said the device could benefit other patients in the future.

He said: “Thankfully, the complication that Mandy had was rare, but we do see it two or three times a year and this system would be ideal for use in that setting. It could also be of benefit to patients before they have a planned reversal of a stoma operation.

“There’s some evidence that the bowel function after reversal is better if they’ve had pre-treatment with this device before they have stoma reversal. That’s another area where it may be of benefit to a wider group of patients to improve their quality of life.”

Mandy said: “It’s been a success. I’m so grateful to have had the opportunity to be the first person in Wales to have this procedure.

“I was happy to give it a go as I had to have a tube to feed me because I couldn’t physically eat. Now I’m able to eat.

“Professor Harris talked me through everything. He has been absolutely amazing. He found out about the new machine, it all stemmed from that.”