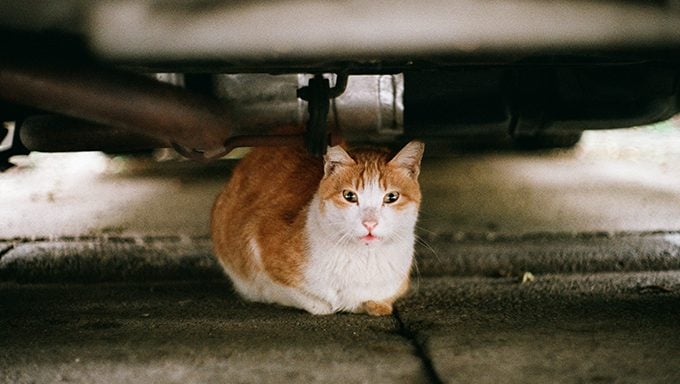 Motorists have been warned of the dangers of accidentally killing a cat this winter after experts said pets could be sheltering beneath cars on cold mornings.

Motoring experts at LeaseCar.uk are warning car owners to be vigilant before heading off as cats may be found sleeping under vehicles on winter mornings.

The experts say drivers should check around their cars in the morning as cats may be sheltering from the frost underneath the vehicle or even in the wheel arch above the tyres.

A sleeping cat could be seriously injured or even killed if a car pulls away before they have had a chance to flee.

Each year thousands of cats are killed and injured on UK roads and the experts say many of them may have been sheltering against the cold under vehicles.

With winter approaching and Britain braced for months of brutal weather all car owners are being asked to be on the lookout for pets before they get behind the wheel.

It is not only cat owning motorists who should be on the lookout according to the experts as pets don’t only target their owner’s cars for shelter.

With December temperatures typically in the range of 0 – 4ºC now is the time to check before a journey in case a neighbour’s cat has taken shelter beneath a vehicle.

Cats love to hide under cars and vans as they feel protected against cold winds and biting frosts. They can also gain warmth from the vehicle’s engine if it has been recently running.

Tim Alcock from LeaseCar.uk said: “No driver wants to be responsible for the death of somebody’s beloved pet cat.

“But on these cold mornings, it’s important to bear in mind that someone’s furry friend may be peacefully slumbering under the car.

“We’re asking every driver to spend a couple of minutes checking for any pets that might be lurking around the tyres or under the car.

“If you do find a cat under the car give it a nudge or shoo it away before turning the engine on and gently pulling away.

“It’s important for all drivers to be aware of this and not just those who own cats. After all, cats don’t just target their owner’s cars for a snooze. Any vehicle is fair game to them.

“Accidentally harming a neighbour’s cat could seriously damage relations with the neighbour themselves and could lead to all kinds of bitterness and other issues.

“So it really is worth taking a few minutes each morning to make sure there are no cats under the car. Unlike dogs it isn’t a good idea to let sleeping cats lie.”