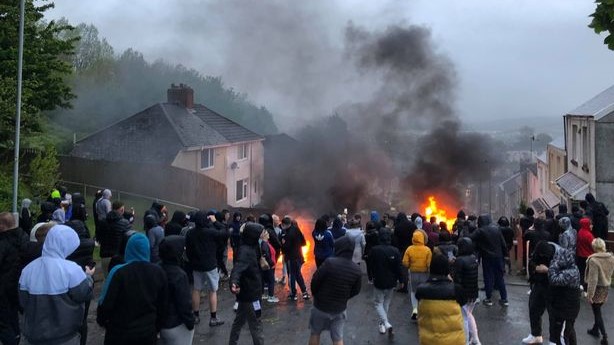 Eighteen people have been jailed for a combined total of 83 years and five months for their part in the Mayhill riot.

All were convicted of rioting following the disorder in Mayhill on the 20th May last year.

South Wales Police were forced to apologise for their handling of the riot with an independent report describing how “residents of Waun Wen Road, Mayhill were left unprotected for a significant period of time”.

It says that there were “failings in command structures and decisions, operational decisions and tactics, and communications” with regard to the Police’s response to the disturbance, and calls on a “forensic investigation” to take place to better understand “the full extent of these failings and explanations for any failings”.

Large numbers of youths gathered on Waun Wen Road in Mayhill on the night of 20 May, 2021 setting fire to cars and throwing bricks at vehicles and homes as a “vigil” into the death of teenager Ethan Powell turned violent.

The following sentences were handed down at Swansea Crown Court:

Three more people are due to be sentenced for their part in the disorder tomorrow (Tuesday, December 20).

Detective Inspector Gareth Jones from South Wales Police said: “This was violence of an extreme nature and was a calculated defiance of the law and a deliberate attack on the police that attended.

“The numbers involved caused real fear to the local residents who witnessed the events or whose property was damaged during the course of the disorder.

“Several factors have contributed to the success of this investigation and prosecution. Members of the public made witness statements and many more sent us mobile phone or door cam footage.

“The investigation that followed was thorough and meticulous and resulted in the evidence being presented in a way that compelled the court to convict these individuals.

“The sentences handed out to these individuals reflect the severity of what they did last May. They joined together, armed with weapons, sticks and bricks and spared no thought for residents or the potentially fatal consequences that could have occurred.

“I am pleased to say that justice has been served and I hope the sentences issued today will give those who were intent on being part of the disorder plenty of time to reflect on what they did.”