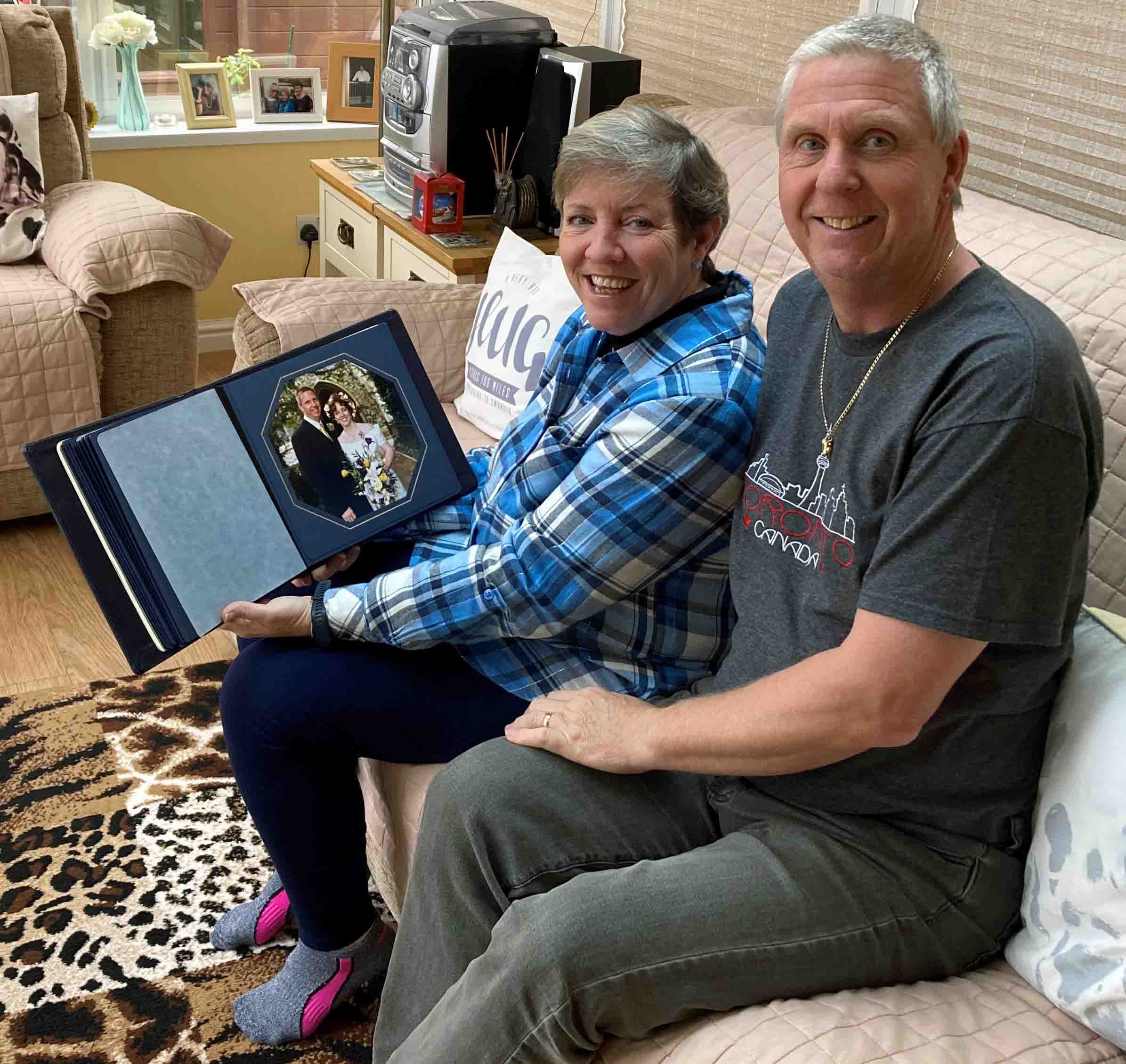 A devoted couple who decided to renew their marriage vows following a cancer diagnosis ended up having to wait three years to do so.

They had to postpone the ceremony five times because of what they have come to know as the 3 Cs – cancer, Covid and chemotherapy.

Two major operations added to the complications. But, this summer, Swansea couple Paul and Ashley Pegg finally achieved what they had first discussed back in 2019.

Instead of gifts they asked their guests for charitable donations. They have now presented £1,000 to the South West Wales Cancer Centre at Singleton Hospital where Ashley received some of her treatment.

The couple tied the knot in 2000. But, almost foreshadowing what was to come many years later, cancer caused a sudden change of plans.

“We were supposed to have been married on 15th July,” said Ashley.

“My mum, Valerie, had been suffering with skin cancer for around two and a half years, but it spread very quickly on her last holiday in Barcelona.

“She was flown back early during the second week of her holiday, straight into the Royal Marsden Hospital in London.

“The doctors told us she would not make it until July. I wanted my mother at my wedding, so we brought it forward.

“We had five days to organise everything. It went ahead on 1st June and my mum died on the 13th, at the age of 65.”

Her mother was from St Thomas in Swansea. Though born and raised in Surrey, Ashley spent her summer holidays with family back in Wales.

After she and Paul met, he joined her on regular trips to Swansea. Then, in 2017, they took the plunge and set up home in the city.

But in December 2018, Ashley was diagnosed with ovarian, colonic and umbilical cancer. After her first operation the following February, it was discovered they had merged to become mucinous ovarian cancer.

“It was the cancer diagnosis that triggered the decision to renew our vows,” she said. “I was told it was a very rare form of ovarian cancer and the average lifespan was three to five years.

“It was a real shock. We decided to renew our wedding vows, thinking I wasn’t going to be here.”

They set the date for June 13th 2020, their 20th anniversary year and the anniversary of her mother’s death. But then the pandemic meant that had to be postponed. And there was to be a further delay.

Ashley was in remission after the first operation, which was followed by a course of chemotherapy and immunotherapy.

But the cancer returned, and a second operation followed in October last year, with the subsequent course of chemotherapy finishing this April.

In total the ceremony was postponed five times before it finally went ahead in August, with a service at All Saints Church in Mumbles.

This was followed by a three-course meal at Swansea’s Marriott Hotel with around 140 guests in attendance.

Ashley has been involved in numerous charitable activities, including raising funds for Ty Olwen at Morriston, Maggie’s and a pancreatic cancer charity after her close friend Carol, who died in 2020, was diagnosed.

“When we renewed our vows we decided to raise money by asking our guests to make donations instead of buying gifts,” she said.

“By then we’d been married for 22 years. We had everything we wanted. We had a home. We had each other. There was nothing we needed.

“I wanted to do it for a mucinous ovarian cancer charity, but as it’s so rare there isn’t one specifically for it.

“My oncologist, Dr Rachel Jones, mentioned the Cancer Centre had a charitable fund, so Paul and I agreed we would give to that.”

Between them their guests donated just under £900, with Paul and Ashley topping it up from their own pockets to make it a round £1,000.

The SWWCC was officially opened in September 2004 following a massive fundraising campaign supported by the South Wales Evening Post and by people from across Swansea, Neath Port Talbot and West Wales.

They raised more than £1 million, which contributed to additional funding by the NHS to ensure the centre was built.

It provides access to modern chemotherapy and radiotherapy units. The SWWCC also has an inpatient ward at Singleton, and a research unit.

Donations to the South West Wales Cancer Centre fund support patients and staff over and above what the NHS can provide.

Joanne Abbot-Davies Assistant Director of Insight, Engagement and Fundraising for Swansea Bay University Health Board, said: “Our thanks go to Ashley and Paul for contributing to our charity as a lasting way of celebrating their time together.

“Every penny we receive counts for patients and staff at the South West Wales Cancer Centre.”