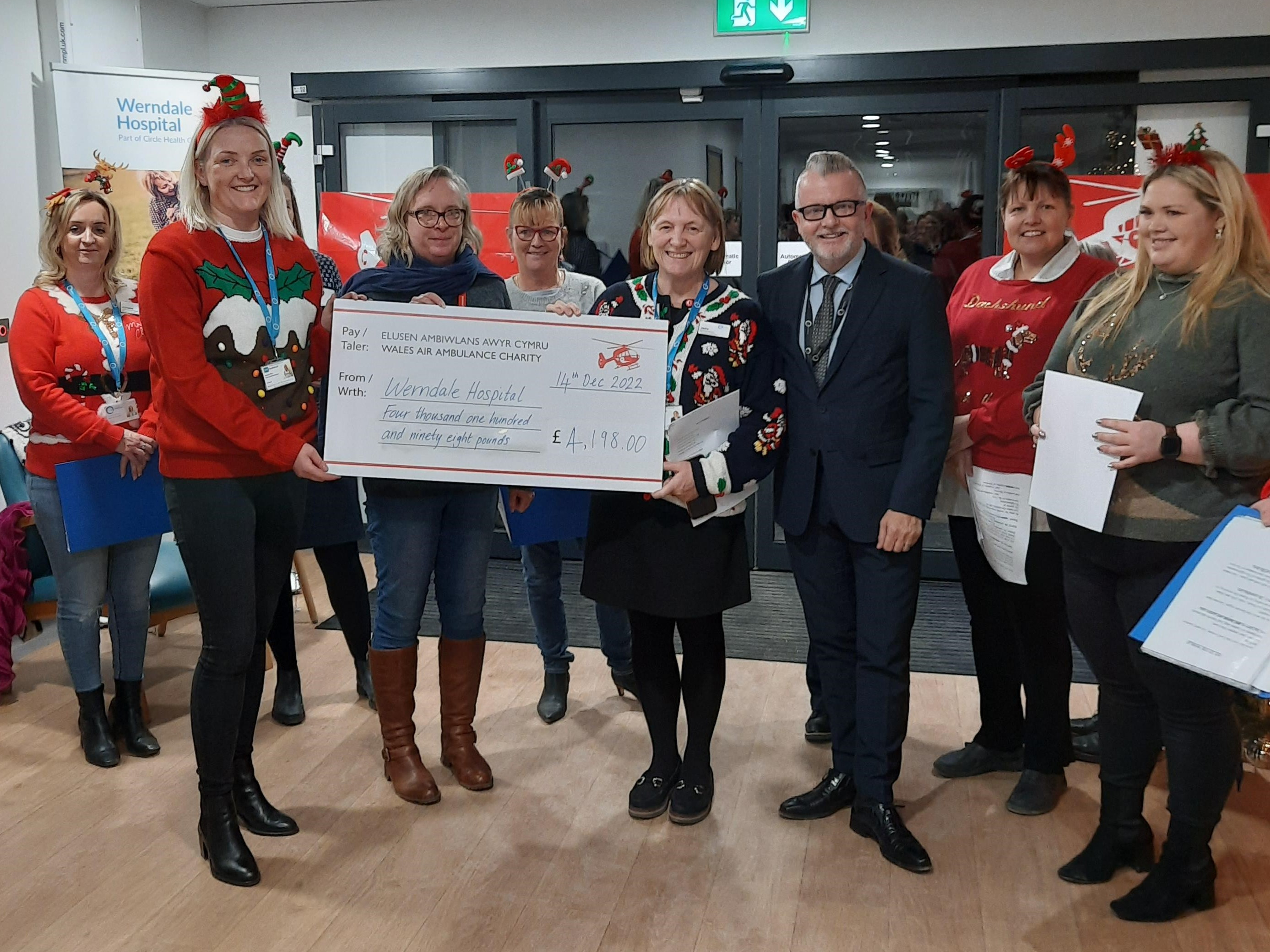 Staff and consultants at Werndale have been busy this year fundraising for Wales Air Ambulance.

Throughout the year there have been a number of fundraising initiatives at the Carmarthenshire Hospital, including a raffle during UK Air Ambulance Week, a tombola, a Christmas carol event with Werndale’s newly formed Choir, a Christmas Jumper Day and the ever-popular Advent Raffle.

In 2022, the hospital raised £4,198 for the charity, which included match funding from Circle Health Group. At the latest fundraiser, a Christmas Carols evening, the Werndale Choir sung carols for staff and patients, and a cheque was presented to the charity.

Circle Health Group launched a ‘giving something back initiative’ in 2021 and this empowers Circle’s 52 hospitals nationwide to select a charity in their community to partner with and raise funds to support. The scheme has raised thousands of pounds for good causes across the UK this year.

Operationally, Wales Air Ambulance crew provides life-saving care to those in need before they reach hospital. The charity’s critical care consultants, practitioners and world leading equipment can be deployed at a moment’s notice and transported to vulnerable people in Wales, wherever and whenever they need it.

The money raised by Werndale hospital will play a significant role in ensuring that this vital service will carry on saving lives across Wales. Without fundraising partnerships such as this one, Wales Air Ambulance would not be able to raise the £8 million annually they need to keep flying.

Jacky Jones, Executive Director of Werndale Hospital, said: “Our staff choose Wales Air Ambulance, as our partnered charity for 2022 because it is close to the hearts of so many of us here at Werndale. They play a vital role at the heart of the local and national community, delivering lifesaving emergency care to people in need.

“The partnership represents a fantastic opportunity to support colleagues in the wider healthcare system in Wales. We have been blown away with the generosity of everyone and will be continuing our support for Wales Air Ambulance throughout 2023.”

Jessica Price, Sales and Marketing Manager of Werndale Hospital, said: “The fundraising activity has brought together business across Carmarthenshire in support of Wales Air Ambulance. Everyone at Werndale is grateful for all the generous raffle prize donations we have received from the Scarlets, Mansion House in Llansteffan, Fox and Hounds in Bancyfelin and Cuckoo’s Nest in Llandeilo. This support helped us hit our fundraising target”.

Hannah Bartlett, Fundraising Campaign Manager from Wales Air Ambulance, said: “Wales Air Ambulance is absolutely delighted to be named as Werndale’s Charity of the year again in 2023. We would like to thank everyone involved for supporting our lifesaving charity, your continued support will help us to be there for the people of Wales when they need us most. With your support, we want to be here long into the future – serving Wales, saving lives.”