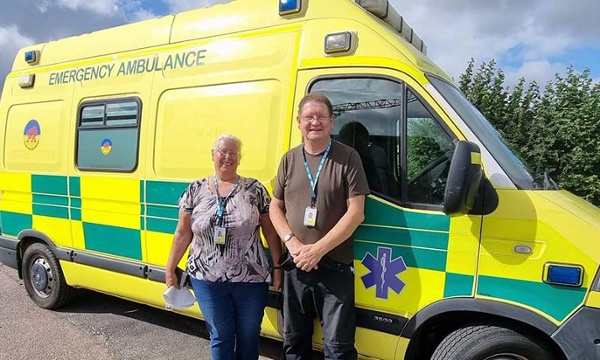 David ‘Dai’ Morris, an Advanced Paramedic Practitioner (APP) for the Welsh Ambulance Service, on several occasions has driven up to 2,000 miles from his home in South Wales to Ukraine.

He has managed to transport with the help of others, up to 40 decommissioned emergency vehicles, filled with medical aid, including intensive care equipment, paramedic trauma equipment, generators, maternity and paediatric equipment along with first aid provisions.

This will help bring vital lifesaving care to Ukrainians remaining in towns and cities under attack.

He said: “Being ex-military, the sights of civilian refugees and civilian casualties stirred something inside of me that made me want to do whatever I could to help.

“As a result, I have travelled alone as well as with others and several charities to take ambulances as well as medical equipment and aid from the UK to Ukraine.

“My first trip was an eye opener.

“Evidence of conflict, deprivation and suffering is everywhere.

“I left with three other people and took four decommissioned ambulances, filled with medical provisions designated for Lviv.

“As we had driven the ambulances there, our journey back started on foot, before we were able to get a bus, then train and connecting flight back.

“I missed my connecting train as I had decided that I would spend my remaining money on 50 Big Mac Meals and 75 Happy Meals for the women and children refugees I met.”

On his second trip, Dai secured a decommissioned emergency ambulance from a private ambulance service in Kent, along with two decommissioned rapid response vehicles, destined for the Donbas Region.

He continued: “On this trip, while I drove the ambulance, the rapid response vehicles were crewed by an anaesthetist and her husband and the other by a nurse and a midwife.

“All vehicles were filled with medical provisions and delivered to a children’s hospital.

“On the way, we met a GP from North Wales and his friend, driving a large articulated lorry that was filled with humanitarian goods for Ukraine.”

Since these initial journeys, Dai has made multiple more, including a recent trip with his wife Anne Morris who is also an APP for the Trust.

The husband and wife APP duo have two children and one grandson together, and also have a combined total of 60 years service within the NHS.

Anne said: “I spent my annual leave preparing for the journey, collecting the decommissioned rapid response vehicle that was previously used in Flintshire.

“I then spent time collecting medical supplies, I even had some items posted to me by members of the public who wanted to help the Ukrainian medical services.

“As a result of traffic delays, it took me just over 48 hours to deliver the vehicle and aid.

“But I was very happy to see them collected and to see my husband.

“Dai and I had a few days training people on the vehicles and teaching first aid before heading back to the UK.”

Although back home, they both continue to help the people of Ukraine, and with sixteen ambulances having been lost during the conflict, they continue to fundraise.

Dai said: “These trips to help support the people of Ukraine have only been possible through the support of my wife Anne and my family, and the many friends and acquaintances that have all helped me in their own way to help individuals in their hour of darkness.”

Jason Killens, Chief Executive at the Welsh Ambulance Service, added: “All of us in Team WAST work each day to contribute to saving lives across Wales.

“For David and Anne to also be helping aid the people of Ukraine in their free time is phenomenal.

“Like so many people around the world, I have watched on with great sadness at the ongoing conflict in Ukraine and it is gratifying to see members of the Welsh Ambulance Service going that extra mile to help.

“Thank you for your extraordinary effort and commitment.”

You can help Dai help others by donating via his Go Fund Me page.