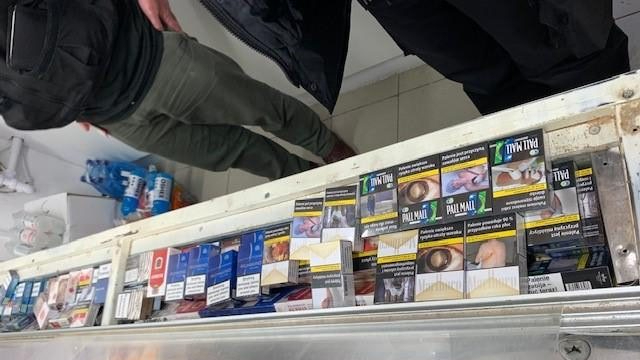 The message came after a Swansea-based couple were caught with more than 140,000 illicit cigarettes and almost 20kg of rolling tobacco hidden in a shop on Mansel Street in Swansea City Centre.

The couple were caught following a series of raids by trading standards officers, police and sniffer dogs who found hiding places for goods of a street value of more than £176,000.

Merthyr Crown Court was told on January 6 that Simona Adamova and Jamal Karimi sold illegal tobacco goods from a shop they operated called the Stokrotka Supermarket in Mansel Street.

Karimi had pleaded guilty to a number of charges including fraud and offences under the trade marks act in May, 2022. He was sentenced to 38 months’ jail and ordered to pay costs of £2,750.

Adamova had pleaded guilty to a number of trade mark and consumer protection offences and was remanded on bail for sentencing. She then fled to the Czech Republic, but returned last week and was remanded in custody ahead of yesterday’s sentencing hearing.

At Merthyr Crown Court she also pleaded guilty to a failure to surrender to bail and was sentenced to a total of two years’ jail suspended for two years, forfeiture of £2,750 and ordered to pay a victim surcharge of £156.

The court was told the couple were arrested after specialist search dogs who can accompany officers into local shops and sniff out tobacco hidden there, helped uncover the crimes.

Counterfeit tobacco does not go through the same manufacturing controls as legal tobacco and is often manufactured using additional harmful ingredients alongside the tobacco.

Officers are now calling on the public to provide information if they think a shop could be selling illegal tobacco – especially to people under the age of 18.

Rhys Harries, Trading Standards Team Leader in Swansea Council, said: “Last year we confiscated large quantities of counterfeit tobacco and cigarettes from a number of local shops in Swansea, including tens of thousands of cigarettes and 220kg of rolling tobacco.

“In this particular case the dogs were able to find goods hidden in places as diverse as ceiling cavities and in the false bottoms of shop displays. But our message to people who willingly put others’ health at risk is that this case demonstrates there is no hiding place for you.

“The counterfeit tobacco was tested and failed to comply with UK safety standards designed to prevent the cigarettes from continuing to burn when not being smoked which helps prevent house fires. This was a concern for us and also it’s very likely those who are trading in illegal tobacco are also selling it to those under the legal age limit.

“The use of the search dogs has been invaluable as they can direct us to tobacco products that have been hidden within the shops we are visiting.”

David Hopkins, Cabinet Member for Corporate Services and Performance, said: “Our message is to call on the public to play their part by contacting our trading standards team if they suspect illegal tobacco is being sold.

“While we accept that some of our residents are smokers we want to ensure they are as safe as possible and not purchasing counterfeit tobacco or cigarettes.”