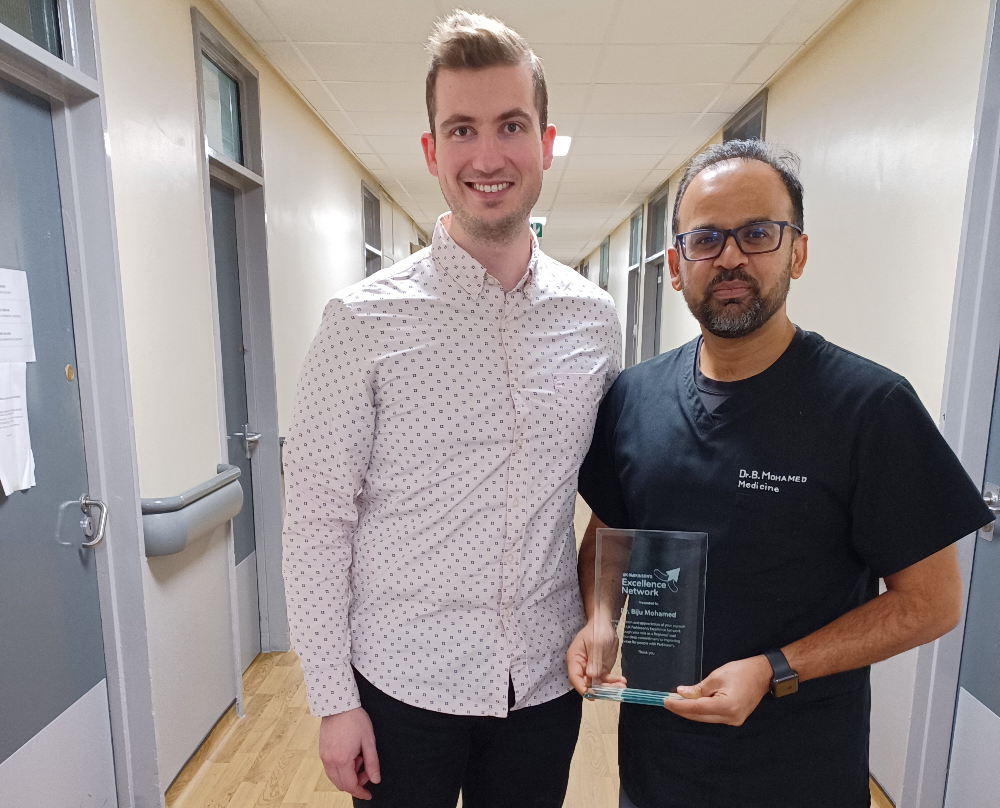 Dr Biju Mohamed, a Consultant Geriatrician at Cardiff and Vale University Health Board, was the first ever Parkinson’s UK Excellence Network Regional Lead for South Wales.

He has been presented with a special plaque by the UK Parkinson’s Excellence Network, which helps health and social care professionals provide better support for people with Parkinson’s, as he steps down from the role after 8 years.

The Excellence Network brings together and supports health and social care professionals to share best practice, provide resources and education, and drive improvements to services for people with Parkinson’s and their families.

During his tenure, Dr Mohamed and his team have also developed a web app, and an accompanying website, www.myparkinsonsuk.org.uk, with links to Parkinson’s UK Cymru, which is full of useful information and advice for people who have the condition.

They have also developed a bespoke electronic health record and communication tool for Parkinson’s which is being rolled across to other health boards in Wales with Cwm Taf already using it and interest from Betsi Cadwallader health board as well as pioneered virtual clinics in Parkinson’s utilising PKG ( a watch device that records Parkinson’s movements).

Dr Mohamed, 47, said: “I have enjoyed my time as the Excellence Network Regional Lead for South Wales and acknowledge the support from colleagues across the country, especially Dr Chris Thomas and the team at Cardiff and Vale University Health Board.

“Its been my privilege to work with Parkinson’s UK for many years to spread best practice between health professionals and positively impact lives of people with Parkinson’s and their loved ones.

“I am encouraged by the new format of the Excellence Network and with enhanced support, I am certain we can make a huge difference to people with Parkinson’s”.

“The key thing is that every person with Parkinson’s is different. Having met thousands of patients with Parkinson’s over the last 20 years, no two patients have the same problems and no two solutions work the same for every patient.

“His contributions over the years have been invaluable and we appreciate all his efforts a great deal.

“Biju and his team will continue to support people with Parkinson’s and their families in his role with Cardiff and Vale University Health Board and we look forward to working closely with him to drive improvements.”

Related Topics:HealthParkinson'sParkinson's UK Cymru
Up Next