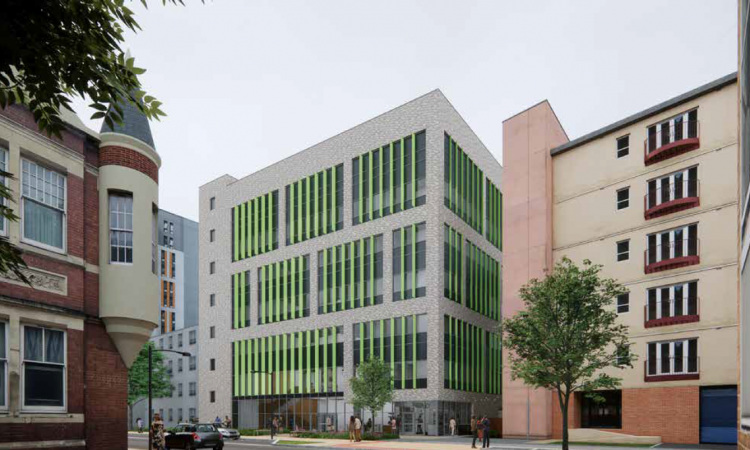 A new ‘wellness centre’ has been proposed for an Orchard Street site in Swansea city centre, that could employ 347 staff according to planning details.

The proposal, by Swansea Bay University Health Board and landowners Coastal Housing association is for a site at 34a Orchard Street, currently occupied by Elysium Gallery.

According to planning documents, the proposed building will house a number of services including general medical services, a community dentist and a community pharmacy.

The health board say its location will allow for effective integration with wider community services and create a focus for health and wellbeing within the community.

The adjacent Kings Street that links High Street with Orchard for pedestrians would remain, with some enhancements to paving and greenery.

Part of a former Iceland supermarket fronting High Street, currently occupied by Volcano Theatre to the rear of the proposed development would not be affected by the plans, however the theatre itself would be impacted.

“Whilst the venue has many functions including a gallery, event spaces, and even a climbing wall, the theatre itself is directly below the proposed Wellness Centre development, and will cease to exist if the development proceeds.

“As the theatre is essential to Volcano’s core business, this means that the company would be looking for a new Swansea home.

“We have been an independent hub for creative work by the Swansea community and for visiting artists from all over the world in the High Street since 2011, and at the current premises since 2015, and are proud of the quality, diversity and uniqueness of the work that happens here.

“We hope and expect to continue delivering similar benefits for the city for the foreseeable future.”

A consultation on the proposals is being run by planning specialists Asbri planning, and is available on their website until 11 November, after which a formal planning application will be submitted to Swansea Council.