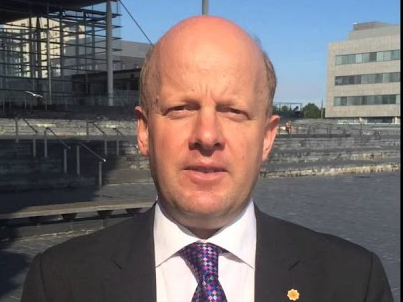 Dr Dafydd Trystan Davies was initially appointed as the independent Active Travel Board Chair in September 2020.

The Welsh Government say he will continue his work in leading the Board in its role of advising and supporting Welsh Ministers in relation to implementing the Active Travel (Wales) Act 2013 and increasing levels of walking and cycling in Wales.

He stood as Plaid’s Welsh Assembly candidate for the Cardiff South and Penarth seat in 2016, where he came third with 14.3% of the votes.

Davies was was chair of Plaid Cymru from 2013 until 2019, when he was replaced by Alun Ffred Jones.

He is currently the Senior Academic Manager and Registrar for Coleg Cymraeg Cenedlaethol.

The Minister for Climate Change, Julie James said; “I am pleased with the re-appointment of Dafydd Trystan Davies as Chair of our Active Travel Board. He will continue to bring a wealth of experience to the role promoting Active Travel and creating conditions in Wales that will make it much easier, safer and appealing for many more people to walk and cycle for everyday journeys.

Dr Dafydd Trystan Davies said; “I’m delighted to have been reappointed to Chair the Active Travel Board by Welsh Government. The pandemic has cast a large shadow over our work over the past two years, but I’m confident that with the commitment from Welsh Government to develop active travel across Wales and positive engagement from local authorities and other partners we’ll be able to make significant strides forward over the next two years. The climate emergency we face demands nothing less.”