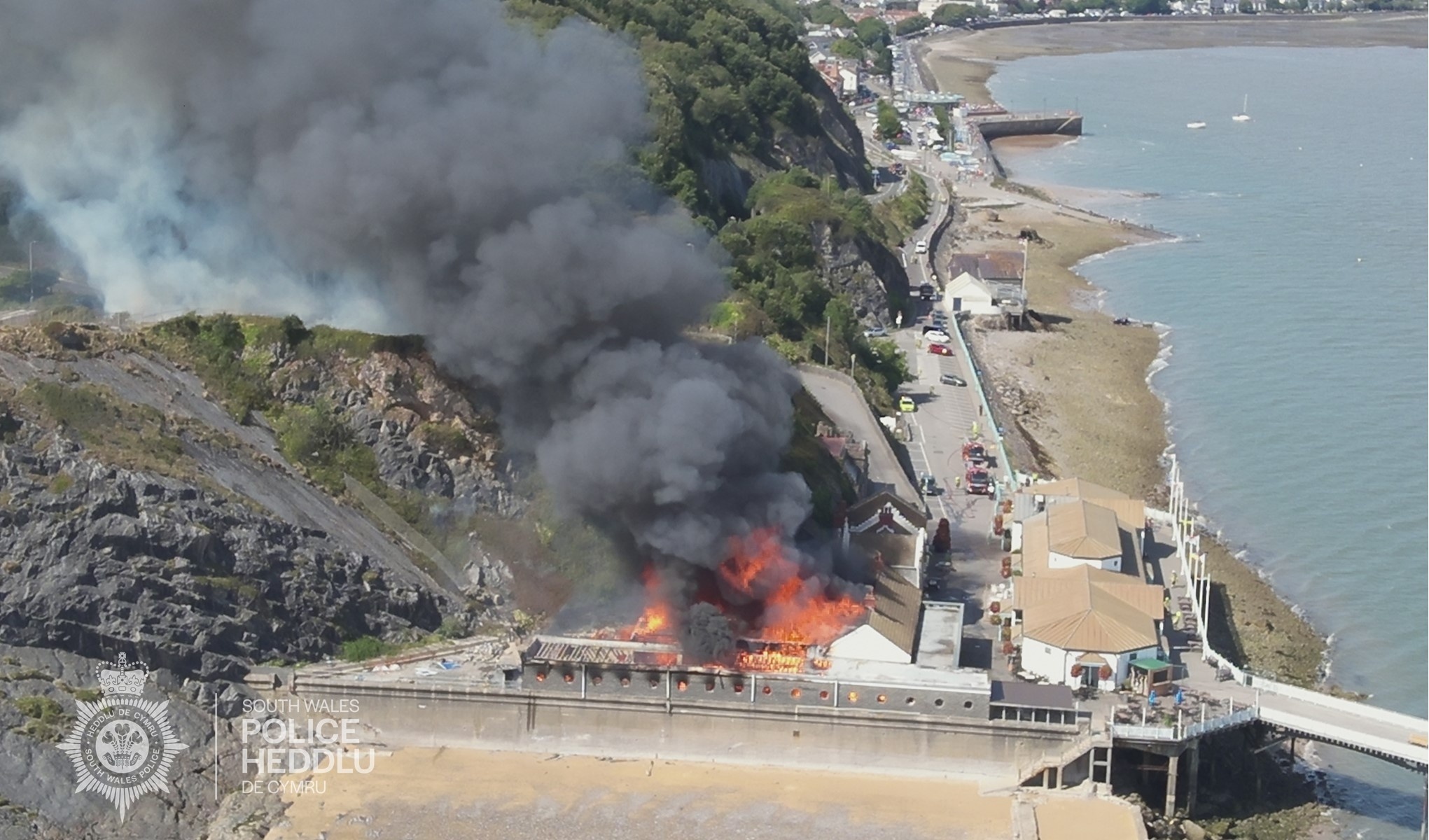 Smoke can be seen for miles across Swansea Bay after a fire broke out at the former Cinderella’s nightclub on Mumbles Pier.

Diners at a café on the pier were evacuated as emergency services tacked the blaze. Local residents are being urged to keep their windows and doors closed and to avoid the area.

A spokesperson from South Wales Police said: “Shortly before 11.30 this morning (Wednesday 31 August), emergency service were called to a fire at Mumbles Pier.

“Local road closures have been put in place and the public is advised to avoid the area while the fire is being tackled.”

Fred and Bert Bollom, the third generation of the Bollom family to own the iconic pier have said they are “completely devastated by today’s fire at Mumbles Pier”.

In a statement, the brothers said: “We are still trying to understand the cause of the fire, but we believe it started to the rear of the former Cinderella’s building and spread throughout the row of buildings on that side of our complex. Thankfully, the pier itself and the arcade appear to have escaped any damage from the fire.”

The brothers add that they were “incredibly grateful” no-one had been injured, saying that “this is in no small part due to our wonderful team who pulled together, kept calm and worked quickly to ensure everyone left the site safely. We want to sincerely thank each and every one of them.

“We also want to express our gratitude to the emergency services, particularly the fire service and police, for responding so quickly today. We will continue to work with them in their investigations and we will keep our customers updated about our situation in due course.”

Mumbles Pier announced on social media that they are “closed from now until further notice.”

First Cymru buses suspended their open top tourist bus between the city centre and Mumbles due to the fire.

Mid and West Wales Fire and Rescue Service confirmed that crews from Swansea Central, Morriston, Port Talbot, Neath, Tumble and Carmarthen were called to the incident.

A spokesperson for the fire service said the “incident is currently ongoing and crews are still on scene.”

A previous fire, almost exactly 10 years ago in October 2012 caused significant damage to the pier’s decking, although the main structure was unaffected.

The Pier is currently undergoing further refurbishment with around £1.85m recently secured to bring the Victorian icon back to its former glory.

Related Topics:featuredfireMid and West Wales Fire and Rescue ServiceMumblesMumbles Pier
Up Next

New boat pontoon could be built in Mumbles