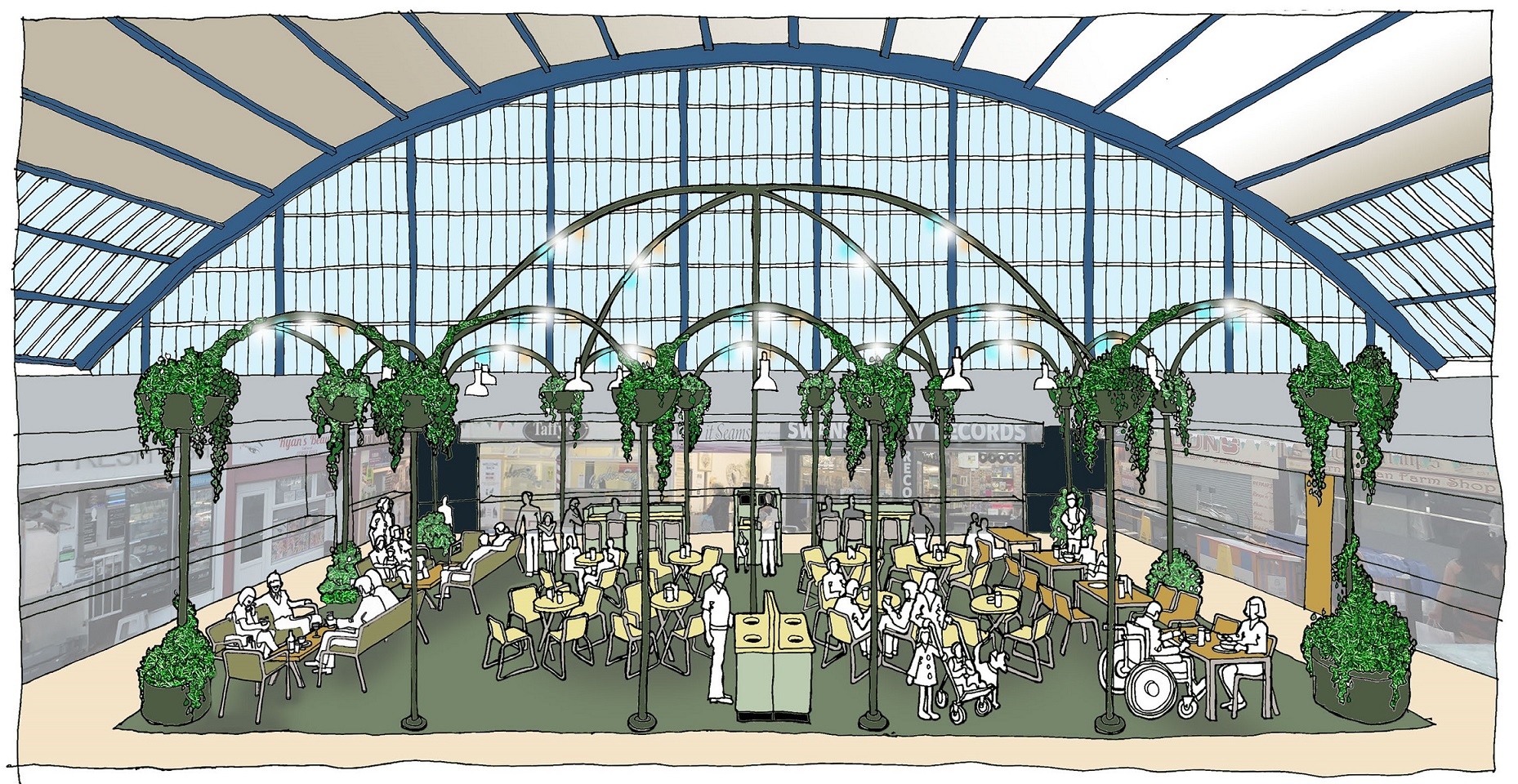 Visitors to Swansea Market will be able to socialise while enjoying fresh produce and tasty food and drink bought on-site in a newly created centrepiece at the award winning destination.

Hundreds of residents along with traders have taken part in a consultation to have their say on design options to improve the existing central area.

They have backed plans for a pergola themed area for people to meet, eat and spend quality time as part of an overall £1m investment in improved facilities and COVID rent concession support for traders.

Following feedback some amendments will be made to the original proposals which will see seating, greenery and a 7.5m-tall landmark feature that mirrors the market’s iconic glass roof.

Positive comments included descriptions of the design as stylish, distinctive, graceful and vibrant.

The planting and green theme was well received and people said that the pergola design was more in keeping with the architecture and use of the market than the other design option presented.

The adaptability of the space for events and exhibitions was another recurrent theme where positive comments were made.

It will be managed by a designated member of market staff throughout the day to ensure it is kept in top condition and for its intended purpose.

It will be flexible enough to host a range of events, including speciality markets such as the popular vegan market, exhibitions and displays.

Existing market attractions such as the cockle rotunda and the surrounding permanent stalls will remain in place, it will not involve narrowing any of the aisles and a new stall will be created for existing casual traders.

Robert Francis-Davies, Swansea Council’s cabinet member for investment, regeneration and tourism, said: “Almost 400 shoppers and traders took part in the consultation and have helped us to reach this point.

“We’ve listened very carefully to the feedback on this consultation and we’ve amended the plans to take into account the views of a small number of traders and their customers who expressed a concerns about the proposals, including the width of aisles and lines of sight from around the market to their stalls.

“We’ve also responded directly to the traders who are located in the immediate vicinity of the new area and contributed to the consultation. We’d like to thank everyone for their input.

“Although the market is only open at the moment for essential shopping it will hopefully not be too much longer before restrictions are lifted and other traders can get back up and running.

“Swansea Council is determined to continue to support them to recover and to see the market go from strength to strength in the coming months and years.

“The retail industry and city centres are changing; the development of a more social, flexible and desirable area to attract new customers is an opportunity to move forward with the times without changing the character or main function of Swansea Market.

“Plans similar to the ones we consulted on have been a real success in similar markets elsewhere, including Bradford, Bolton, Leeds and Newtown in Wales.”

The project is being funded by the Welsh Government’s Targeted Regeneration Investment programme and the council.

Other improvements in this project include the recently opened accessible free-to-use public toilets. To come are free public Wi-Fi, new interactive LED signs and improved entrances.

The market, managed by the council, is the permanent home to more than 100 businesses.