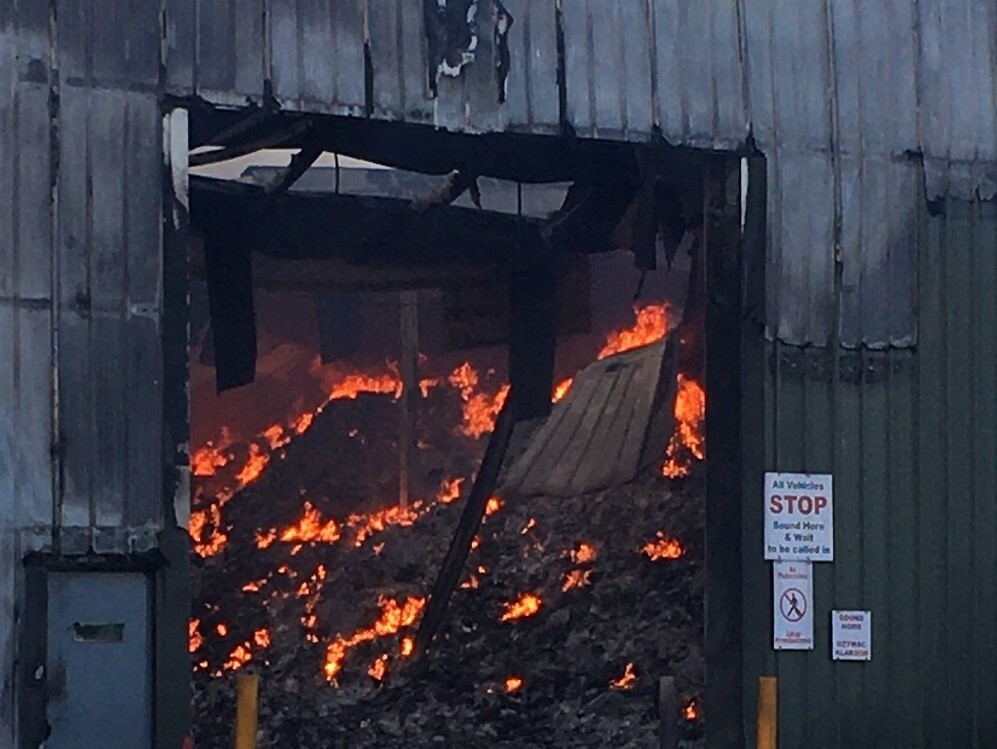 Local residents are advised to keep their doors and windows closed as a fire at a Carmarthen recycling centre continues for a second day.

Huge plumes of smoke can be seen for miles from the massive fire on the outskirts of Carmarthen, close to the main A48 trunk road that links the M4 with West Wales.

Mid and West Wales Fire and Rescue Service report that eight fire appliances have been in attendance after a call at 3.15pm on Saturday (24 April). The fire service remains in attendance almost 24 hours later.

The Council and fire service report that the fire is under control and no injuries have been reported.

County Councillor and Labour Senedd candidate Rob James thanked the quick response from the fire service and reported that he is in contact with senior officers at the Council.

Natural Resources Wales (NRW) report that they have been pollution control measures put in place by the fire service while they continue to attend to the fire.

In a statement, NRW said: “We have attended a fire at a regulated waste site at Nantycaws, Carmarthen supporting Mid and West Wales Fire and Rescue Service. A fire water management plan in place, with fire water being contained in an on-site lagoon. We will visit the site again in the morning.”

The site is run by CWM Environmental Ltd. Head of Operations Paul Wakelin said: “We are working very closely with the fire service and I would like to thank them for all that they are doing. We do not yet know the cause of the fire and a full investigation will need to be launched.”

The recycling centre is now closed until further notice. The waste transfer station for the disposal of commercial waste is also closed.

The council is advising any residents that had appointments to visit the recycling centre from Sunday, April 25 to Wednesday, April 28 to visit one of the other recycling centres at Trostre (Llanelli), Wernddu (Ammanford) or Whitland if they wish any time between 8.30am and 5.30pm.

Carmarthenshire Council says their kerbside recycling service is unaffected by the fire, and people should continue to put their recycling or refuse out as usual on Monday.

We would like to reassure residents that in collections will take place as normal tomorrow (Monday, April 26) and the week ahead despite a fire occurring at the Materials Recovery Facility (MRF) at Nantycaws. This includes garden waste collections ⤵️https://t.co/srEfpiMHOw pic.twitter.com/fz1Wib2scm— Cyngor Sir Gâr (@CarmsCouncil) April 25, 2021