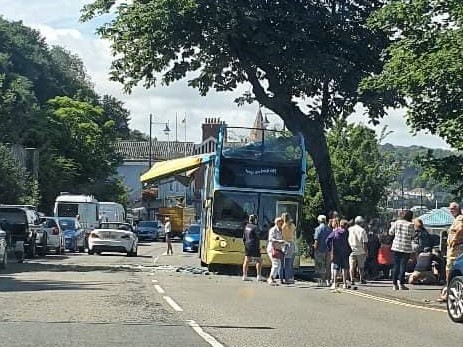 South Wales Police are reporting that there are a ‘number of injuries’ following an incident involving an open top double decker bus at Mumbles.

Thankfully, none of those injuries are reported to be life-threatening or life-changing.

Images of the bus, which appears to have struck a tree, show the front portion of the upper deck to have ripped off.

The cabriolet-style bus had a fixed front section of the top deck roof with the rear open to the elements.

The ‘Cymru Coaster’ branded bus, operated by First launched at the end of May taking tourists from the city centre bus station through the marina and onto Bracelet Bay at Mumbles.

Mumbles Road is currently closed, and Police are advising motorists to avoid the area.

A First Cymru spokesman said: “We can confirm one of our vehicles operating the Swansea to Mumbles service was involved in a collision earlier this afternoon.

“Following the incident the operator immediately implemented its emergency procedures and sent representatives to the scene to provide support to those involved and the emergency services.

“We will work closely with the emergency services as part of our investigation.”

A Welsh Ambulance spokesperson said: “We were called this afternoon at 2.32pm to reports of a road traffic collision involving a double decker bus on the Mumbles Road, Swansea. We sent two rapid response vehicles, one emergency care doctor, one emergency ambulance, our emergency medical retrieval and transfer service, the Wales Air Ambulance and our hazardous area response team to the scene.

“Two patients were conveyed to hospital – one by air to University Hospital Wales, Cardiff, and a second by road to Morriston Hospital, Swansea, for further treatment. Several other passengers were assessed and discharged on scene.”

Swansea Council Leader Rob Stewart has reacted to the news of the accident. He said: “Very sorry to hear of the incident in Mumbles with the open top bus. Road is currently closed. Police are on the scene and thankfully have reported no major injuries. Best wishes for everyone to make a full recovery”.