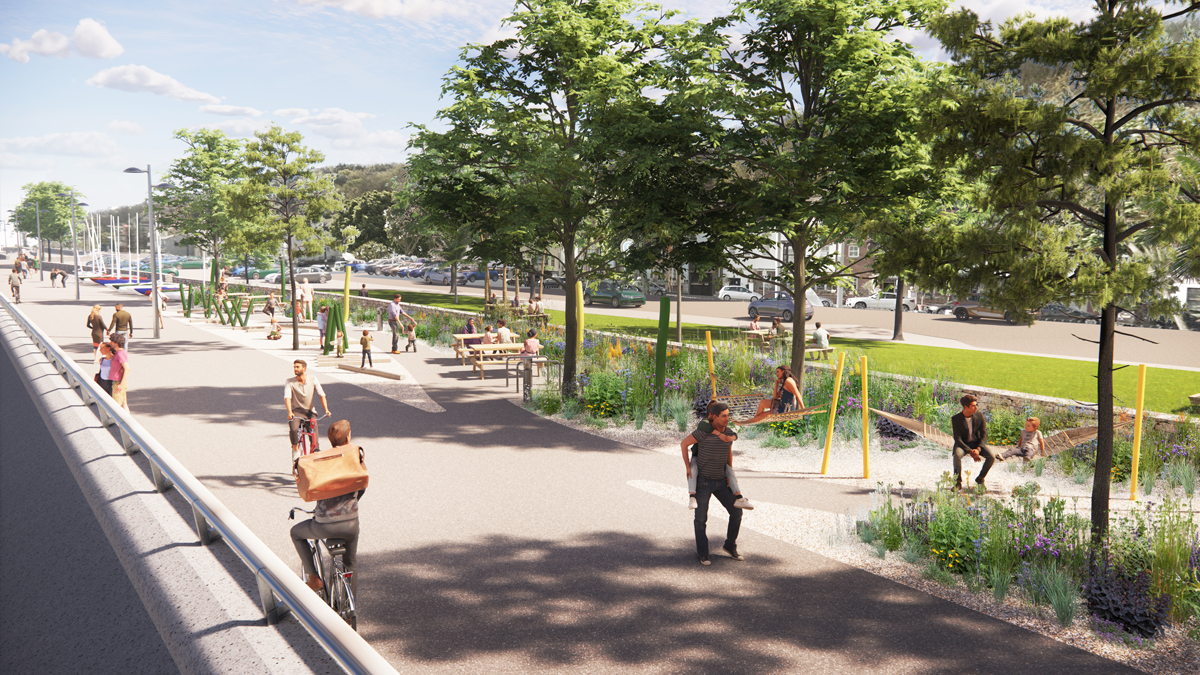 New proposals for sea defences in Mumbles have been unveiled by Swansea Council – which they say have been developed using the views of the public from recent consultations.

The thoughts and ideas are woven into a Swansea Council vision that will protect the community against flooding and rising tides – and which the council say will improve the prom as a safe, modern, inclusive visitor attraction.

The proposals include more space for pedestrians and cyclists to share the prom with care, the protection of trees and more opportunities for play and relaxation.

Mark Thomas, the council’s cabinet member for environment enhancement and infrastructure management, said: “We’ve listened to the public, business and others such as Mumbles Community Council – and we’d now like their feedback on the exciting detailed proposals we have.

“We need to preserve homes businesses and facilities on Mumbles seafront for future generations and that’s what the improved sea defences will do.

“The prom – which lies between the defences’ primary and secondary walls – looks tired right now so we’re taking the opportunity to freshen it up and make the community an even greater attraction than it is now.”

The enhanced coastal defences are needed due to climate change and wear and tear on the existing Victorian structure. Council research shows that, without new sea defences, the risk of flooding for householders and businesses will keep on rising.

As a result the council and consultants Amey drew up a scheme for the 1.2km stretch of defences from the Oystermouth Square car park to the slipway in front of The Pilot pub, near Verdi’s.

A public engagement on the initial ideas was held this summer. Feedback from the public, organisations and others helped the council draw up detailed proposals that can now been studied by all online.

The public and key organisations can now have their say again – in a formal process known as a pre-application consultation (PAC). This proposal will be improved with the public feedback then go through a formal planning process which will offer a further chance for the public to have their say.

The council says the latest scheme protects homes and businesses while maintaining sea views from the prom. It sees the prom widened to create new space for pedestrians and cyclists but maintaining most car parking in the area.

Cllr Thomas said: “It’s an exciting plan with important twin aims of protecting Mumbles and improving it as a destination. The aim is to be sensitive to Mumbles as a seaside visitor destination while protecting people and property.

“In line with the public’s wishes, it will reflect the area’s heritage and culture, will improve biodiversity and will allow cyclists and pedestrians to use the same exceptional prom space – and share with care.

“It’ll make pedestrian links between the prom and Mumbles Road businesses much better.

“Separately, we’ll take a close look at how Mumbles Road can be made safer – and that may include a cycling route for those who wish to reach their destination quickly.”

To take part in the public engagement go to www.amey.co.uk/mumbles-pac

Lead image: How part of the Mumbles Prom could soon look in the Hennebont Gardens area (Image: Swansea Council)