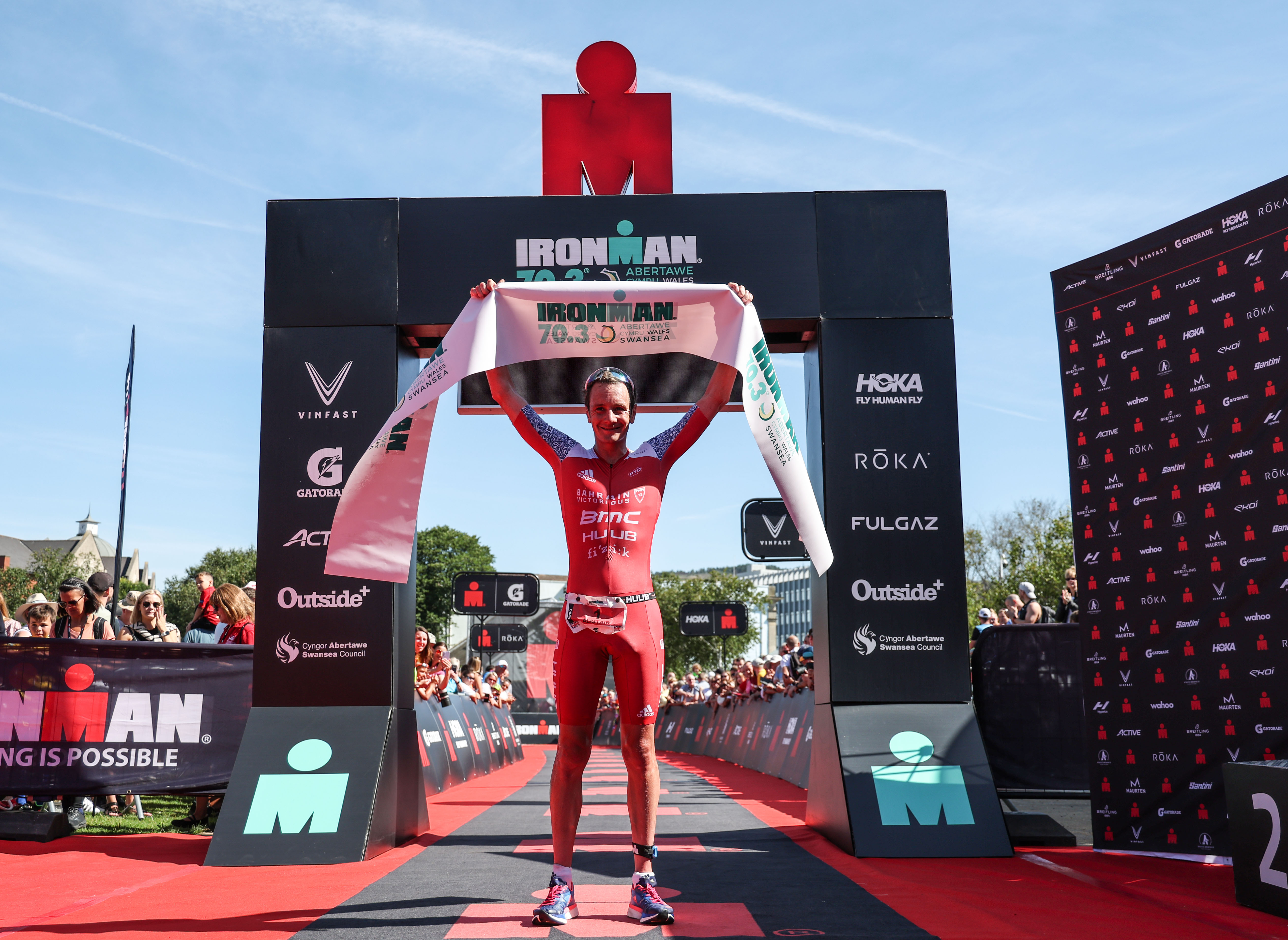 Olympian, Alastair Brownlee has won the inaugural IRONMAN 70.3 Swansea, with thousands of spectators lining the Swansea to Gower course to watch the event.

Alistair Brownlee said: “It’s been a tough year with some ups and downs, I think I decided to race Swansea about three weeks ago. It’s actually a place I know pretty well as I’ve done some training here throughout the years, so it’s nice to be back. It’s great to take on my first 70.3 in the UK.”

On the podium, Brownlee said: “I had a couple of occasions where I was going up a hill, looking at the view over the coast to my left or right, which was really beautiful. There were some great crowds in random spots throughout the Gower, with people popping up on farm tracks and all sorts. It was lovely. I think the crowd and the weather are what made it today.”

At the pre-event press conference, Kat Matthews said: “I’m most looking forward to the change in dynamic of the course. You’ve got the first half which is really punchy rolling hills, trying not to get distracted by the sea and beach. Then you’ve got the slight technical aspect, and then you’ve got the TT element. I think it just adds the whole package to the race.

“We’ve been in and out of the cafes, actually experiencing the local area. It’s been amazing – all the locals have already been really nice. I think we’ve seen a mix of the normal Swansea, having arrived so early, and then the triathlon community wafting through. It’s been a really good mix.”

Swansea’s own Shane Williams also toed the start line at the inaugural IRONMAN 70.3 Swansea, finishing the race 16th in his age group with a time of 05:17:46. His first IRONMAN 70.3 event ahead of his upcoming full-distance triathlon at IRONMAN Wales in Tenby on 11 September, Williams credited the spectator support as his key driver to participate in IRONMAN events.

Ahead of the race, Shane told organisers: “I’m most looking forward to the support. It’s the reason I did my first IRONMAN down in Pembrokeshire. The support at IRONMAN Wales is unbelievable, and I’m expecting the same in Swansea. If any of the other IRONMAN events are anything to go by, we’ll have a stack of people showing up to cheer us on.”

A proud 63% of the athlete field raced for Wales, with over 700 athletes from the Swansea area taking to the middle-distance course. Topping the Tri Club podium were local clubs Celtic Tri, Swansea Vale Tri, and the Port Talbot Harriers, who collectively brought 160 of their affiliated athletes to compete in the event.

IRONMAN 70.3 Swansea sold out over 2,000 places in less than four days and brought an estimated economic boost upward of £2.5m to the region. Returning to Swansea until at least 2024, the event will look to continue growing its popularity and visibility over the coming years.

Swansea Council say that the event brought an estimated £2.5m to the economy, with many accommodation providers doing excellent business along with many other businesses in the hospitality sector.

Ahead of the event, Declan Byrne, VP of Operations, EMEA at The IRONMAN Group said: “It takes a while to get to this point in an event’s evolution. It was November 2019 when we came down here first, to get this event up and running on a windswept day. We met our good partners in Swansea Council and Welsh Government who wanted to support this event.”

“We wanted to put a 70.3 in Wales. That was the vision. We know how strong the Welsh triathlon community is, especially in South Wales, and we felt that Swansea was the perfect location when we met with the teams here. It was also the fact that it was a community and a host venue that really wanted us to be here.

“We have a fantastic field of professional athletes as well, which delivers a brilliant image for this event that puts Swansea and the triathlon community on the global map.”

Council cabinet member Robert Francis-Davies said: “It was an amazing week, topped off brilliantly by the weekend’s two world-class events.

“I thank all those who took part, arranged and supported the events – and thank all residents and businesses across Swansea and Gower for their patience and understanding as they made changes to their day-to-day lives.

“We do appreciate that road closures cause some disruption to normal daily routines – but they’re important to make such events as safe as possible for all involved and local residents.

“Bringing top class sport and other events to any location has its challenges but we’re determined to give the people of this area their biggest ever programme of major events.

“They give local people great things to see and do – and they boost the local economy in a substantial way.

“This truly was a big weekend of international sport and it shone a global spotlight on Swansea as a destination.”