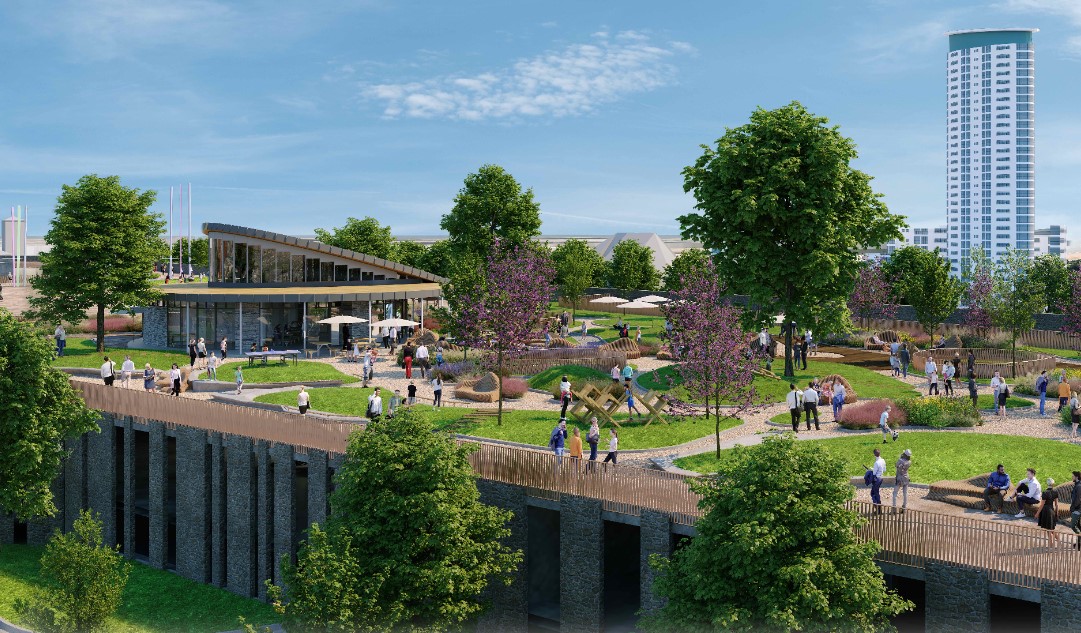 The 1.1-acre coastal park being constructed next to Swansea Arena will help further green-up the city centre.

Free WiFi will be available there too, along with solar-powered benches enabling people to charge their smartphones, tablets and laptops. A new café and restaurant is also being constructed at the coastal park.

The coastal park forms part of the city’s emerging £135 million Copr Bay phase one district being developed by Swansea Council and advised by development managers RivingtonHark.

Buckingham Group Contracting Ltd is leading on Copr Bay phase one’s construction, including the coastal park, which is on track for completion in the autumn. Ambassador Theatre Group (ATG ) will operate Swansea Arena.

Designed in a dune-like shape to mark its closeness to Swansea beach, the coastal park is being constructed above a new car parking complex. A living wall will run alongside the Oystermouth Road side of the new car park.

The new coastal park will build on extensive recent council work to introduce more greenery in Swansea city centre. This includes the major environmental upgrade of the Kingsway and a soon-to-be introduced pop-up park at the former St David’s shopping centre site.

Cllr Robert Francis-Davies, Swansea Council’s Cabinet Member for Regeneration, Investment and Tourism, said: “The coastal park is going to become a family favourite in Swansea, combining with the living wall to bring yet more greenery, biodiversity and activity to the city centre.

“Together with a new café and restaurant right next door to the Swansea Arena, the coastal park will deliver a first class destination where people can relax and enjoy the stunning views.

“The installation of the Copr Bay bridge also means we’re generating better links than ever before between our city centre and forthcoming attractions like the arena and coastal park. This will benefit existing businesses by generating more footfall and trade, while also helping attract even more investment and jobs for the benefit of Swansea people.

“The coastal park is yet another example of our on-going commitment to transform Swansea into the one of the greenest and best cities in the UK to live, work, study and visit.”

Other plans in Swansea include roof and terrace greening at the high-tech office development to be constructed at the former Oceana nightclub site on the Kingsway. A ‘living building’ office scheme will also be constructed nearby, complete with an urban farm-style greenhouse set over four floors.