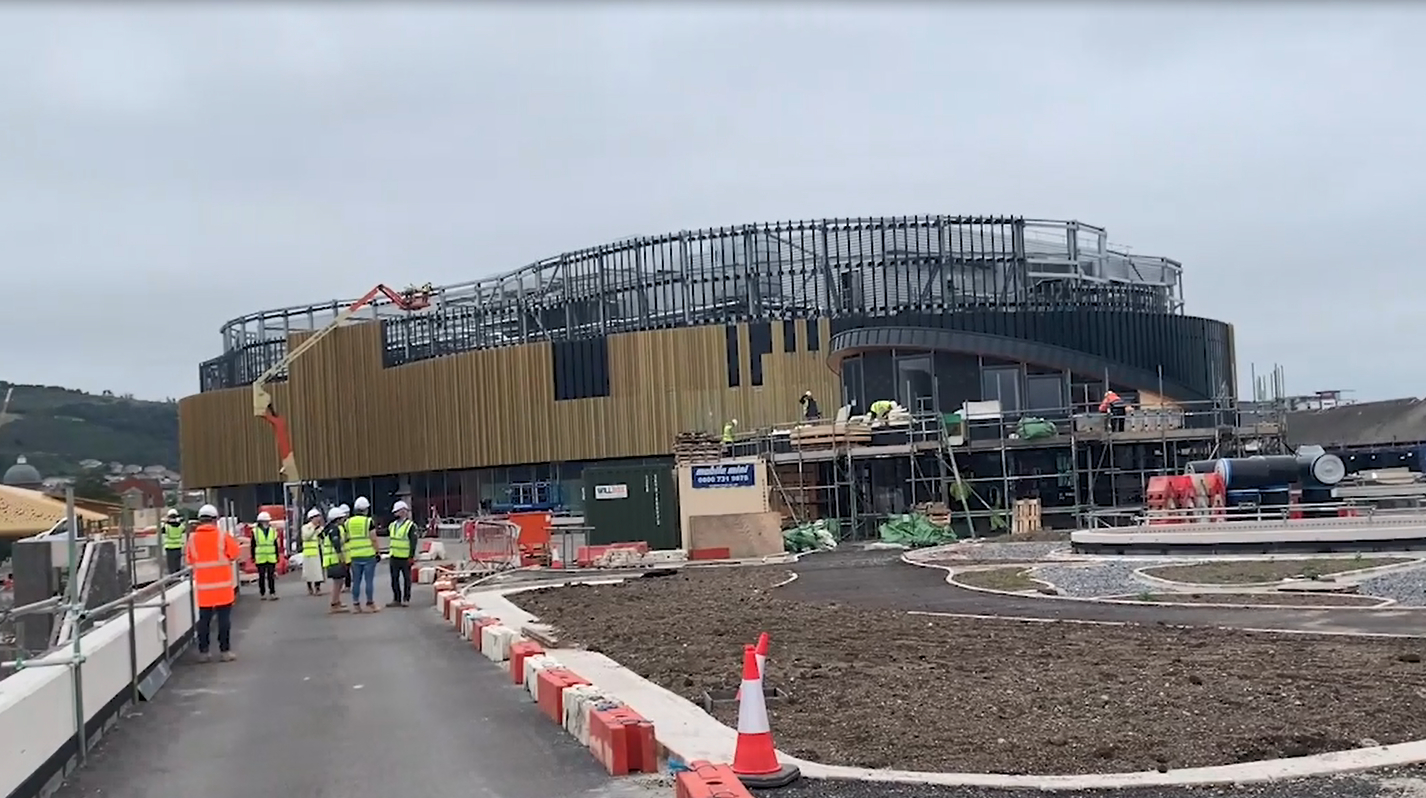 Each panel will be equipped with LED lighting technology, enabling the hosting of light shows around the outside of the attraction. Once the arena is complete and open, the panels could also be used to promote upcoming shows, concerts, conferences and other events. Over 1,600 panels are being installed, complete with more than 95,000 LED lights.

The Copr Bay phase one district is being developed by Swansea Council and advised by development manager RivingtonHark.

Construction work on Copr Bay phase one – led by Buckingham Group Limited – will be complete later this year, with the 3,500-capacity arena opening its doors in early 2022.

Cllr Rob Stewart, Swansea Council Leader, said: “The Copr Bay phase one development is really now starting to take shape ahead of the completion of construction later this year. Worth £17.1m to the city’s economy, it will attract hundreds of thousands of new visitors to Swansea who will stay in our hotels, take local taxis and spend in our local shops, restaurants and bars. This will help our city’s economy grow, while accelerating Swansea’s recovery from the pandemic.

“Not only will Swansea residents and visitors to the city soon be able to enjoy the world-class Swansea Arena, but they’ll also benefit from the first new city centre park since Victorian times and better links than ever before between the city centre and our stunning seafront.

“Swansea business The Secret Hospitality Group is on board to run the café and restaurant in the coastal park, and more Copr Bay phase one tenants will soon be announced.

“This development will also act as a catalyst for more investment in Swansea, bringing even more jobs to the city while further raising Swansea’s profile across the UK and beyond as a first-class city to live, work, study and visit.”

Swansea Council is financing Copr Bay phase one, with some funding for the arena coming from the Swansea Bay City Deal. The Copr Bay bridge forming part of the scheme is part-funded by the Welsh Government’s Active Travel fund.

People in Swansea thanked for offers of Afghan refugee support

A reprieve could be on the cards for Alltwen, Godre’rgraig and Llangiwg Primary schools as Neath Port Talbot’s new coalition administration say they want to review the decision made to create a new ‘super school’ in Pontardawe.

The new administration says it wants to establish if an alternative way to bring 21st Century School standards to the Swansea Valley can be achieved, which would be more acceptable to the community.

The decision to establish a new £22.7m English-medium 3-11 school and specialist Learning Support Centre for pupils with a statement of Autistic Spectrum Disorder in Pontardawe to replace Alltwen, Godre’rgraig and Llangiwg Primary schools was taken by Neath Port Talbot Council’s Cabinet on October 20th, 2021.

The controversial decision triggered a process of communicating with local schools around the next steps and general planning for the construction of the new school and swimming pool.

A successful tender exercise took place to secure a contractor to begin stage one of a two stage process.

Neath Port Talbot Council say that under its own procurement rules, it says it has been necessary to approve the appointment of the contractor to undertake Stage 1 contract works only, with no obligation on the council to proceed to the second stage. Stage 1 includes developing the design information; carrying out assessments of traffic and site conditions; ground investigations; and obtaining planning approval.

The council say that this first stage contract does not commit them to the construction of the school and pool, with a further contract being entered into at Stage 2, which is the actual construction phase.

It adds that allowing stage 1 works to progress will ensure that the opportunities to meet the timescales of the October 2021 decision could still be realised if a review does not highlight any changes are needed to the project.

This will avoid further anxiety for the school staff and families due to unnecessary delays, particularly important for those pupils in Godre’rgraig Primary School who are currently educated in temporary accommodation awaiting the new school.

Neath Port Talbot Council say they will now start discussions with Welsh Government Ministers to establish what information they might require from the council. This will inform the consultation process which the council will undertake with stakeholders.

Ferryside author John Nicholl is celebrating the re-release of his Carmarthenshire-based detective books as the Carmarthen Crime Series.

His new publisher, Boldwood Books – winner of Publisher of the Year in the 2022 Independent Publishing Awards – has repackaged the four books with a strong emphasis on the Carmarthenshire setting and covers depicting local locations including Carmarthen, Dryslwyn Castle and the Tywi Estuary.

The first two books, The Carmarthen Murders and The Tywi Estuary Killings, are on sale now, with the other two – The Castle Beach Murders and The Dryslwyn Castle Killings to follow soon.

The books focus on DI Gareth Gravel, an accomplished, old-school policeman affectionately known as Grav, who feels out of step with the modern world as he approaches retirement.

“Grav is something of a legend within the West Wales Police Force, liked and respected by the rank and file but not so much by the top brass due to his sharp tongue and a willingness to bend the rules to get results,” says Nicholl, who lives in Ferryside.

“Grav is overweight, loves rugby, drinks too much, particularly since the loss of his wife, and is struggling with chronic health issues. The job matters to him, victims matter to him, and he often goes the extra mile to protect the vulnerable victims of crime, particularly women and children, who he has a strong inclination to protect.”

The books draw on Nicholl’s own experience as a police officer and then as a child protection officer in Carmarthenshire. He started writing fiction after his psychologist recommended it as a way to process traumas he had witnessed during his career, which left him with PTSD.

He self-published his first book and it became an online bestseller; he went on to get signed by a publisher and now has 11 bestsellers behind him. His focus is on crime and the darker side of human nature, with a strong empathy for victims of abuse.

“The four-book Carmarthen Crime Series, while fictional, draws on my real-life experiences as a police officer and child protection social worker,” he says. “I hope this gives the stories a gritty realism readers will enjoy.”

He adds that he is delighted to see the books republished as the Carmarthen Crime series.

“I grew up, live and write in west Wales, and so I’m delighted my publisher has given the books a strong Welsh identity, with stunning covers featuring some of the beautiful locations I know so very well,” he says.

Following refurbishment, visitors to Port Talbot will once again be able to visit the shop located at the lifeboat station at Aberavon seafront.

The shop refit marks the start of a new era. The shop was opened in loving memory of the previous shop manager, Phil Jones, who sadly passed away in early 2021.

Phil had kept the shop open single-handedly for over twelve years with much success. Phil’s wife and daughter kindly agreed to officially open the new shop on Sunday 12 June when many memories were shared and there were plenty of best wishes for the future.

RNLI shops started out as simple cake stalls run by volunteers to raise money for their local station. Around 1920 commemorative RNLI products were added and shops were selling souvenirs and Christmas cards, all profits helping to save lives at sea.

The RNLI now has over 170 shops around the coast and inland all of which are run by dedicated volunteers: Port Talbot is no exception.

The shop volunteer team has grown since April 2021 from a team of one to thirteen and is also involved with fundraising.

New Shop Manager Kirstee David says: “It has been amazing watching the shop team develop over the last twelve months and to see how passionate the team is about developing what we offer – and about the RNLI!”

A night to celebrate all that is Grand about The GRAND

Specialist police to patrol Swansea’s beaches and parks this Summer

Swansea school children set to receive IT equipment thanks to DVLA