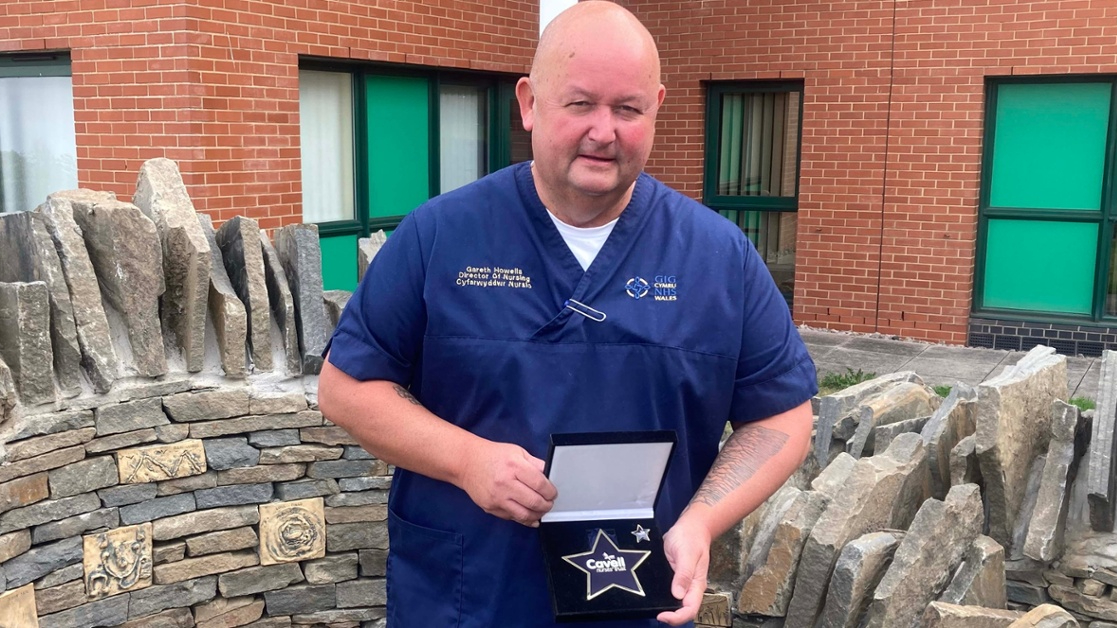 After spending more than 40 years laying down foundations to help his colleagues shine, Gareth Howells has been identified as a star in his own right.

Swansea Bay’s Director of Nursing has been awarded a Cavell Star, given to nurses, midwives, nursing associates and healthcare assistants who shine bright and show exceptional care to their colleagues, patients, or patients’ families.

He was identified as providing a psychological safe space for members of the senior nursing team to enable them to thrive, flourish and reach their potential.

Run by Cavell Nurses’ Trust, the award is the result of a nomination by colleagues that is supported by the charity’s panel of judges.

Deputy Director of Nursing, Hazel Powell, nominated Gareth after witnessing first-hand how he gives staff a platform to express themselves and develop.

She said: “I nominated Gareth for his leadership style and approach.

“He is an extremely experienced leader who even in challenging times is always kind and thoughtful.

“His role includes many challenges and he is always seeking to deliver high-quality, person-centred services and look after staff, but is also kind enough to have the tough conversations and do them well.

“He is a leader who supports the development of others and creates opportunities for others.

“He can work strategically with highly politicised issues – that is a quality of his.

“He works with complexity, with an ability to do it calmly and thoughtfully, and he supports others to find the right solutions.

“Gareth helps those around him feel psychologically safe in a way that enables them to be brave and innovative.

“He really does deserve this recognition, Gareth is extremely modest and has spent his career recognising others so it is about time his contribution is also recognised.

“He’s a star and it is important that we recognise excellent senior leaders – these are tough old jobs and he makes it look easy.”

Image shows a woman and manThe award has proved a proud moment for Gareth, who is responsible for around 5,000 nurses working in Swansea Bay.

Gareth said: “It’s the first award I’ve ever had in 41 years of being within the health industry.

“I don’t go looking for accolades and try not to put myself in the spotlight, so I was really surprised to have been awarded this.

“I’m far more comfortable talking about my colleagues and the fine work they do, rather than talk about myself.

“It’s great to hear from patients that you’ve done a good job in terms of their care, but for this to come from my colleagues really touched me. I feel really proud – it means a lot to me.”

For Gareth, the award comes following a successful career in the health industry to date.

Since starting on a youth training scheme (an apprentice scheme) as a 16-year-old in his hometown of Neath, he went on to train as a Registered Nurse in Singleton Hospital before working in Chepstow, Cardiff and Gwent upon returning to Swansea in 2003.

His career took him further afield to Bristol, Bath and Birmingham ahead of returning to Swansea Bay in 2018.

Following a brief retirement, Gareth took up the position of nursing officer and then Chief Nurse for Wales in Welsh Government for a year, before he was tempted back to the health board in his current role.

His career path, he says, has helped him understand a variety of roles and the people that work in them.

Gareth said: “I have a lot of experience at different levels within the NHS, and my mum was a health care support worker who had a major influence on my decision to become a nurse. My career has taken me from a youth training scheme to the Chief Nurse for Wales, and every level inbetween.

“Setting an environment where everyone has an opinion – whether you agree or not – is really important.

“No matter which level you’re at, we’re all colleagues with the same aim – giving the best care possible to our patients.

“I live by the saying ‘it’s nice to be important, but it’s important to be nice’.

“I have a laid back approach to things. Being professional and getting the best out of the people working for us is something I take pride in.

“That all contributes to patients getting the best treatment and experience possible while they are under our care.”

Related Topics:awardsNeathnurseSwanseaSwansea Bay NHS
Up Next