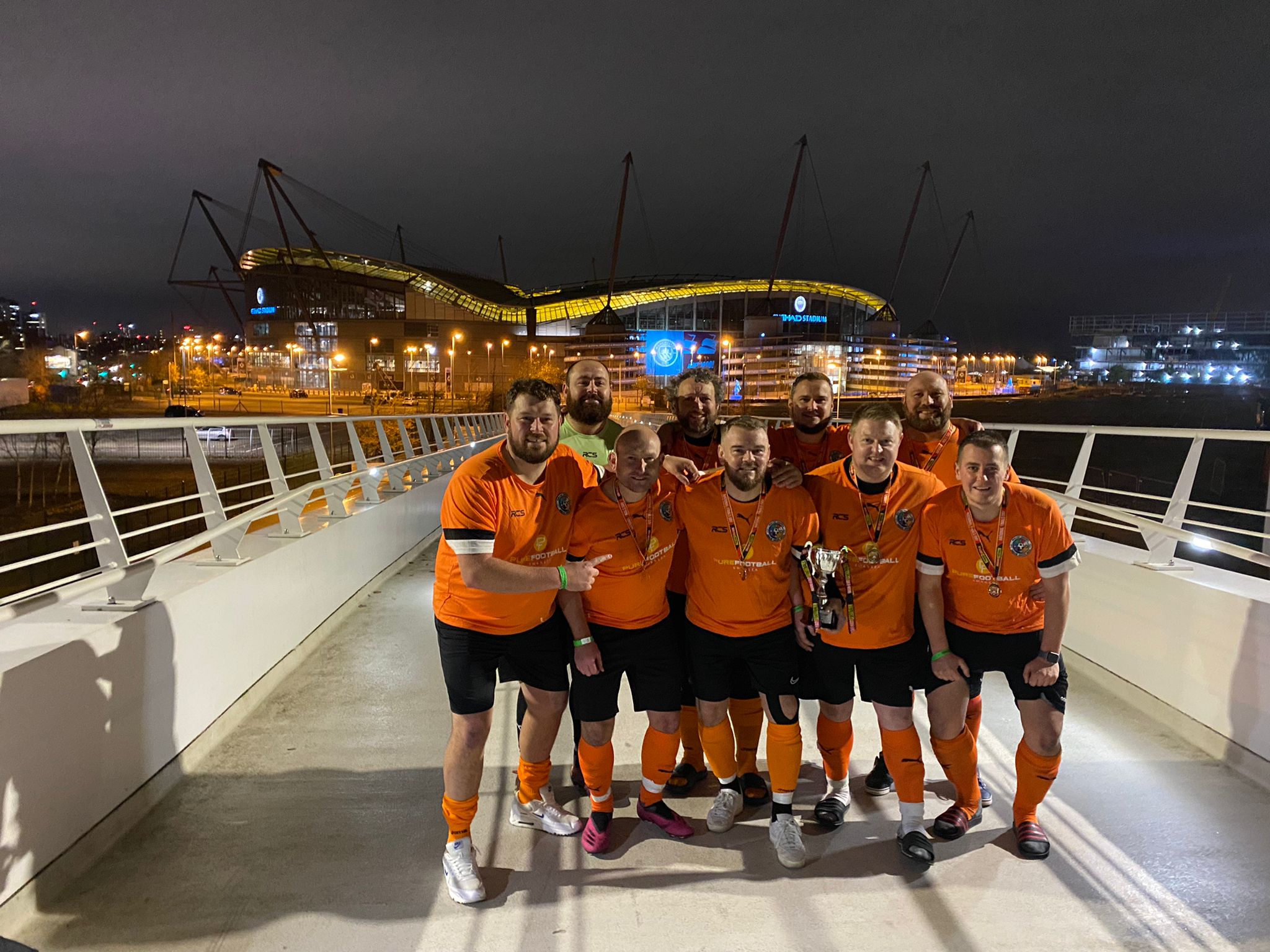 A team of fat fighting footballers from Swansea, who between them have lost a staggering 70.4kg this year –  more than 11 stone – between them on the MAN v FAT football programme, have emerged triumphant at the programme’s National Championships tournament at Manchester City’s Etihad Campus.

More than 40 six-a-side football teams from across the UK that exist purely to help their players lose weight and improve their mental and physical health came together for the tournament. In the end, the Swansea Oranges, which was made up of players from a number of Swansea MAN v FAT teams, defeated the Norfolk N Chance team from Kings Lynn in the final. All the clubs taking part qualified through a series of regional events.

Swansea coach Ben Gleeson said: “This team have achieved something truly special. They became the pride of our club for a weekend and will be so for much longer than that!

“Roughly 15 months ago, we began with nothing but a wonderful venue and a group of 20 strangers. MAN v FAT was an alien concept to the Swansea area. 110 active members later, over a tonne (literally 1,000kgs+) of weight lost, so many lives changed and saved, and now we’re National Champions.

“Our rapid growth from nothing to something has been incredible, and we’re not done yet. This club, this family of brothers, is unstoppable.

“Seeing all the effort, time and energy we’ve put into building this club, this family, all come to fruition as our elected tournament team became National Champions, was genuinely one of the proudest achievements of my life.

“These guys really are a special bunch. We’ve created a league that goes way beyond football and weight loss. We’ve genuinely cultivated a safe haven for men’s mental health and it’s all thanks to how open, honest and vulnerable our members allow themselves to be.”

MAN v FAT, an FA-affiliated scheme, currently has more than 8,500 players taking part in over 170 clubs across the UK. Aimed at overweight and obese men with a BMI of higher than 27.5, the programme was created by Andrew Shanahan, who, fed-up with traditional weight loss classes primarily aimed at women, decided to develop a programme that combines the beautiful game with achievable weight loss goals for men.

Before matches, players are weighed, which is followed by a 30-minute game of six-a-side, with extra goal bonuses awarded to teams based on the amount of weight players have lost. Weight loss and match scores then contribute to teams’ league positions within a club. Players receive additional support including healthy meal recipe ideas and tips on general fitness.

Richard Crick, Head of MAN v FAT Football, says the National Finals are a celebration of the combined achievements of all of those taking part.

“We were thrilled to be able to bring more than 40 teams together at the Etihad as a recognition of all the hard work the guys have put in so far. But anyone who thinks it’s going to just be a celebration is mistaken. It was a highly competitive tournament – all the teams are coming to win the trophy, but Swansea Oranges were just one step ahead of everyone else.”

Players can join up at www.manvfat.com/football and they can get more information by calling 0333 0068 331 or emailing football@manvfat.com

Wales may have flopped, but health charity still hopes to be a winner thanks to signed shirt raffle