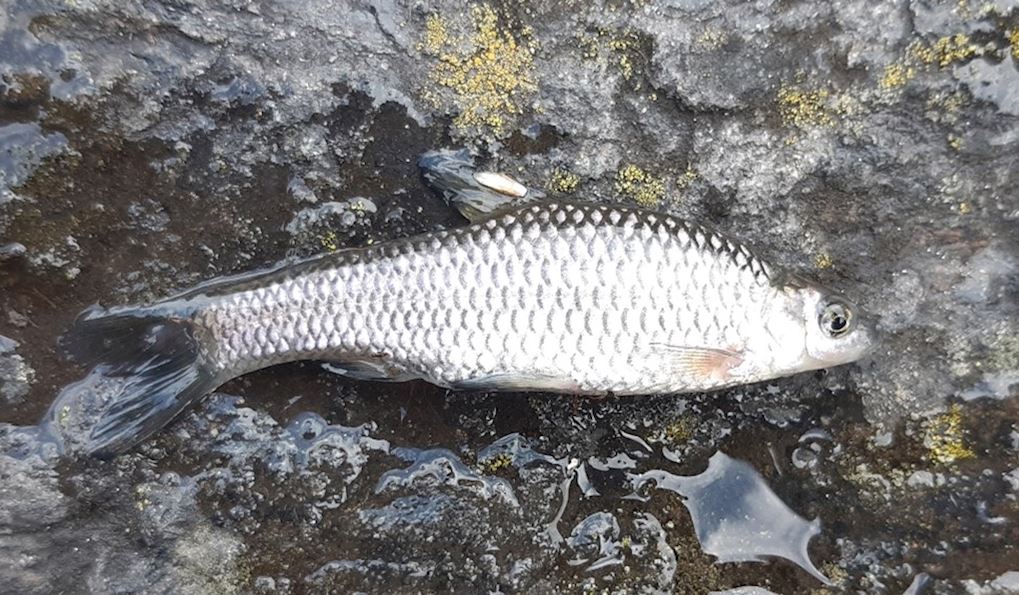 Natural Resources Wales and Environment Agency plan to eradicate the invasive non-native Topmouth gudgeon from a popular lake in Llanelli.

In early January 2023, the two agencies will start work to remove the fish from Sandy Water Park to protect the future of the lake, as well as waterways throughout Wales and England.

The work has been funded by Welsh Government and is supported by landowners, Carmarthenshire County council.

Topmouth gudgeon are native to Asia, but have spread rapidly throughout Europe. The invasive fish poses a significant threat to the ecology and wildlife of rivers and lakes, and the fisheries that they support.

The silver-coloured fish eat eggs and larvae of native fish and reproduce rapidly, spawning up to four times a year. This behaviour can significantly reduce stocks of native fish by outcompeting them for food an habitat. They can also spread disease and parasites that pose a threat to our native species.

Bethany Greenfield, Specialist Fisheries Advisor, Natural Resources Wales, said: “Invasive species pose a serious threat to our native wildlife. It is important that Topmouth gudgeon are removed because of the risk they pose to the environment. If the fish were allowed to escape and spread, they would have a serious impact on native wildlife and habitats in other waters.

“We are working closely with Environment Agency, Welsh Government and Carmarthenshire County Council to carry out this eradication from Sandy Water Park, and another lake elsewhere in Carmarthenshire that is privately-owned.

“If anyone would like to find out more about the eradication programme, there will be an opportunity to meet representatives from Natural Resources Wales, Environment Agency, Welsh Government and Carmarthenshire County Council at Sandpiper Restaurant, Sandy Water Park, Llanelli, on January 5, 2023 between 11am and 1pm.”

Sandy Water Park is one of 34 known sites across England and Wales where the invasive fish have been found.

Work will begin to eradicate Topmouth gudgeon in the first week of January 2023 and will take approximately four weeks to complete.

Welsh Government Rural Affairs Minister, Lesley Griffiths said: “Invasive non-native species are a significant threat to biodiversity and we are taking action here in Wales to prevent introduction and spread including through interventions by local action groups, improving biosecurity practices and targeted eradication. I am pleased Welsh Government funding and collaborative working with partners will help improve biodiversity across the Millennium Coastal Park.”

Carmarthenshire Council’s Cabinet Member for Regeneration, Leisure, Culture and Tourism, Cllr Gareth John, said: “We are working in partnership with Natural Resources Wales and the Welsh Government to eradicate the non-native fish species, Topmouth gudgeon, from a lake at Sandy Water Park, Llanelli.

“Topmouth gudgeon is considered one of the most ‘potentially’ damaging non-native fish species to be introduced to Western Europe and its presence within the lake at Sandy Water Park is a threat to the local wildlife.

“Our officers and colleagues from Natural Resources Wales will be hosting a drop-in session for local residents in the new year, to alleviate any concerns that they may have about the work carried out to remove this species of fish from the lake.

“It is important to note that the work of eradicating the Topmouth gudgeon fish will be carried out humanely and the fish will be removed rapidly with minimum stress to the animal. The water body will be securely fenced off during the period of works.”

Natural Resources Wales say that the water in the lake will be reduced and larger, healthy fish including carp and tench, will be removed and relocated.

The environment body say that a piscicide containing rotenone, will then be applied to the water to kill the Topmouth gudgeon population. This is a naturally occurring chemical like a pesticide or herbicide specifically designed to kill fish.

They add that Rotenone is the most effective and humane way to remove Topmouth gudgeon, causing them minimum distress.

The body say that mammals, birds and shellfish are highly resistant to the chemical and are not affected. It will also not present any risk to park users. Public access around the lake will be restricted while the work is being carried out.

Rotenone naturally breaks down in the water, which NRW say they will be monitoring continuously until it is no longer present, after which the lake can be restored to their former, natural state.