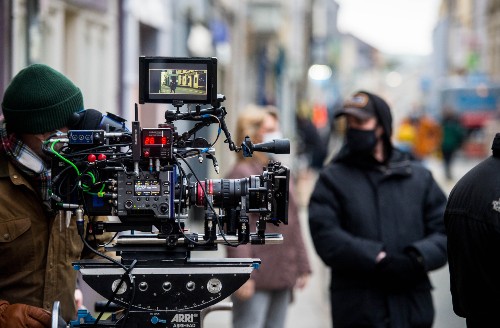 Carmarthenshire is cementing its reputation as a major location for the film and TV industry.

Following on from its success as a location from hit TV drama Keeping Faith, Bollywood film Jungle Cry, and Eddie Izzard-directed Six Minutes to Midnight which is due for release, more production crews are turning their eyes to the county.

Sky has this week announced its production in Carmarthenshire of a new Sky Original film ‘Save The Cinema’, which will be available in cinemas and on Sky Cinema towards the end of 2021.

Filming is currently taking place in Carmarthen and Ammanford under strict Covid-19 restrictions and security measures under the guidance of Screen Cymru, Welsh Government legislation and advice from the British Film Commission.

Set in the 90’s, it is based on a true story inspired by the life of Liz Evans, a Carmarthen hairdresser who with the help of postman turned local councillor Richard, called on Hollywood to save her local cinema when it was threatened with closure.

Filming locations have included The Lyric, King Street and Spilman Street in Carmarthen, and Ammanford Town Hall, as well as in Laugharne and Llandeilo.

Carmarthenshire County Council works with film and TV companies looking to bring their productions to the area – not just to help shine a spotlight on the county, but so that the county’s businesses and hospitality sector can benefit economically.

Income generated by the council for permissions, road closures and use of public buildings is reinvested to provide local services for county residents and businesses.

Leader of the Council, Cllr Emlyn Dole, said: “Carmarthenshire has a growing reputation as a location for film and TV dramas with its rich diversity in coast and countryside, historic features and both rural and urban landscapes. We enjoy working with production companies to explore opportunities for Carmarthenshire to benefit from such screen exposure, both in terms of the economic boost it can bring to local businesses during filming and in the longer term.

“Of course, during Covid we have had to ensure there are enhanced risk assessments and procedures in place in line with Welsh Government guidelines. Filming companies working in the area at the moment have worked with us and have been diligent in ensuring all the necessary safety procedures are in place. We look forward to seeing the production taking shape and eventually on our screens.”