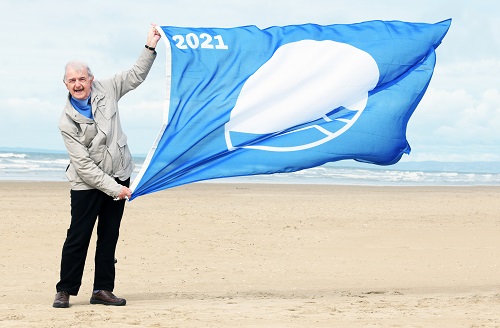 Cefn Sidan has been awarded the most Blue Flags in Wales since 1988, winning on consecutive years since 2009, apart from last year when the awards were postponed due to the coronavirus pandemic.

Since the Blue Flag awards were first introduced in 1988, Pembrey Country Park has won more Blue Flags than anywhere else in Wales.

Cefn Sidan was also the first Welsh beach to win the accolade.

The award is only given to beaches, marinas and harbours that have the highest quality of water, environmental education and management, safety and services. The Blue Flag is an indication of a world class visiting experience for local people and visitors to Carmarthenshire.

Cllr Peter Hughes-Griffiths, Carmarthenshire Council’s Executive Board Member for Culture, Sport and Tourism said: “We’re extremely proud once again to be awarded the Blue Flag. Pembrey Country Park has so much to offer locals and visitors, and this award is a symbol of quality that can be depended on when looking for potential places to visit.”