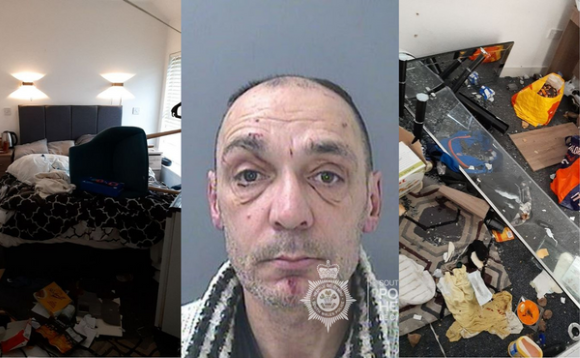 Michael Turner has been sentenced to over a year behind bars after “completely trashing” a room he was staying in at the Heritage Hotel in Porthcawl.

The 52-year-old caused almost £49,000 of damage when he smashed a wooden table, a wardrobe, and a radiator.

Turner had also smashed the glass screen from the shower and flooded the room, causing damage to rooms below and the electric system.

South Wales Police say they responded to the report of significant damage caused and found Turner in the hotel where he was placed under arrest.

On Tuesday (29 November) Turner was sentenced at Cardiff Crown Court to 14 and a half months in prison.

PC Gatt from South Wales Police said: “Michael Turner caused a huge amount of damage and destruction when he smashed his way through a hotel room he was staying in.

“He showed a total disregard for the livelihood of the owners, racking up thousands of pounds worth of damage.

“Many businesses are facing a difficult few months due to the cost of living crisis and are working hard to provide facilities for customers to enjoy.

“It is therefore especially disappointing that Turner made the decision to carry out this offence and we welcome this result and will continue to put people like Turner before the courts.”